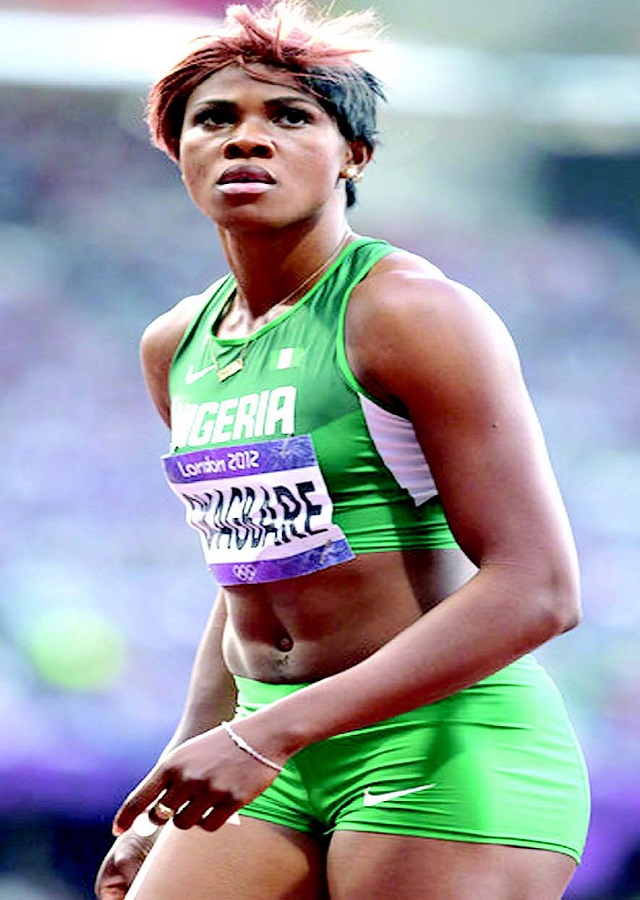 Blessing Okagbare was in the form of her life as she inked her name in Africa’s athletics history books at the IAAF Diamond League meeting in London on Saturday. The reigning Nigeria 100m champion ran 10.79 seconds to set a new Nigerian and African record. Okagbare erased Glory Alozie’s 2000 African record of 10.90 seconds earlier in the heat, running an impressive 10.86 seconds. Olympic champion, Shelly-Ann Fraser-Pryce of Jamaica ran a world record 10.77 seconds in the second heat to set up a mouth-watering battle against Okagbare in the final. Okagbare won the race in exhilarating fashion, finishing in 10.79 seconds to take her IAAF Diamond League points to ten, just two behind Fraser-Pryce who could only muster a fourth place. American, Barbara Pierre finished in second place, running 10.85seconds while Kelly-Ann Baptiste of Trinidad and Tobago ran 10.93seconds to place third. Okagbare chose the venue of Nigeria’s worst ever Olympic outing – London – to make history. The London meeting was tagged Sainsbury anniversary meeting to commemorate last year’s Olympic event. Her win in London ultimately propels her as the favourite to win the Blue-riband title at next month’s 14th IAAF World Championships in Moscow, Russia. She’s on course to become the first Nigerian to win a World title and the second Nigerian woman after Gloria Alozie to win an individual medal at the IAAF flagship Championships.

This article was first published on 28th July 2013

Nigeria occupies the 8th spot on the medals table. Nigeria’s medal haul in the ongoing 2022 Commonwealth Games in Birmingham, United Kingdom, increased to 13 on Thursday, August 4, 2022, after Team Nigeria added four medals. Three out of the four medals were won in Para Powerlifting while one medal came from Women’s Discus Throw. … END_OF_DOCUMENT_TOKEN_TO_BE_REPLACED

The Spanish-based stars were outstanding in Nigeria’s campaign at the continental showpiece. Read more about Sports Nigerian national women’s football team stars, Rasheedat Ajibade and Osinachi Ohale, have been named in the 2022 Women’s Africa Cup of Nations (WAFCON) Best XI. The duo was instrumental to Nigeria’s campaign at the tournament which saw them qualify … END_OF_DOCUMENT_TOKEN_TO_BE_REPLACED

In the space of one week, four Nigerian women have achieved feats that brought some form of respite to the nation in the midst of a tension-ridden political climate. Read more about Sports Asisat Oshoala set the ball rolling on the 21st of June, 2021 when she won the African Player of the year; her … END_OF_DOCUMENT_TOKEN_TO_BE_REPLACED