Rising Trends of the Nigerian Pidgin against Standard English 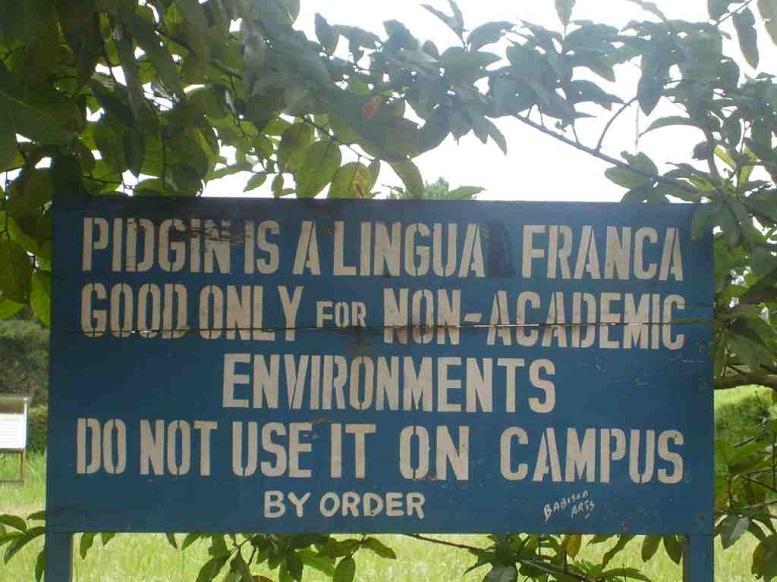 51
SHARES
ShareTweetWhatsappSave
Mail
While my parents grew up, they spoke their native languages at home and English in school as well as other formal settings. This way, they spoke English as well as their dialects correctly, I cannot remember any of their friends of same educational status who speaks grammatically incorrect English. When I was a child, there were lots of indigenous languages spoken, but in formal settings, standard English was accepted. In establishments, standard English was spoken among staff and with clients. Pidgin was a language spoken mainly by or to the uneducated. Today, the scenario is different. In some formal settings, pidgin is used for clients and staff who hail from different localities have adopted it as their medium of communication. This pattern has a disadvantage in educational settings where people who never spoke English as it should be, continue regularly with it and end up mixing tenses and teaching grammatically incorrect sentences to the children looking up to them. With the drastic fall in the use of native languages in our society, the Nigerian pidgin has risen to a place where it can be termed a language of its own. The Wikipedia points out that pidgin has no official status, despite its common use in the country. A beautiful thing about this language is the way it evolves. It is easy for people to create new words and terms daily from their environments. Phrases gain and lose power based on the season. Phrases like ‘you wan try?’ ‘na you biko’, ‘how far now?’ ‘wetin dey?’; ‘hol am’, ‘match am’, ‘fain where stop; ‘I dey trowe salute’, ‘I hail oh’ etc.  are vivid examples of the evolution of Pidgin because each group of phrases says the same thing in ways acceptable at different periods of time. We are also pointed by the Wikipedia to the fact  that words borrowed from native languages also exist in pidgin, making it sound different in its use ‘ Se you dey come?’ is a cited example of how a Yoruba man will speak pidgin. A man from Edo state may say ‘you go come?’ The music industry has gone on to beautify this medium of communication as it has adapted words, terms, phrases and sounds which universalize the industry in the country among all ethnic entities, and this has given our music a unique place  even internationally. We cannot overlook the comic scene where stand-up comedians who have imbibed the ‘waffi’ style thrill us daily with a genre full of slang, melody and humour. I can conveniently say that pidgin is the language of comedy in Nigeria because those who do not use it are very few. The Nigerian pidgin is strong enough to break the barriers of social class as Oga and boy can communicate freely without the embarrassing pauses due to grammatical blunders by the boy. While this helps the self-esteem of those who do not speak English well, it can be a blockade to their quest for excellence as well as present a general lackadaisical attitude towards speaking English properly. This has given rise to an acceptance of a substandard variety of English spoken confidently with sentences like: ‘He said I should cofo him’, ‘Dress for him to sidown’, ‘comot the plates from the table’, ‘gi me my ball’, ‘he is making me to provoke’. I listen to people from older generations and I am thrilled over and over by their good command of English, even by those who do not have sufficient educational background. It is clear that they received tutelage from good sources as English was lingua franca. Today it is a different ball game altogether, pidgin is now used for clients almost everywhere, staff from different localities use pidgin as their medium of communication. This, in educational settings, does not help as some teachers who speak pidgin regularly and have not mastered standard English, mix up tenses and pass grammatically incorrect sentences, like those listed earlier to children who look up to them. Imagine a teacher asking ‘have you do your correction?’ or saying ‘pin-pin’. Have we wondered over time why children say ‘jangolova’ instead of ‘dangle over’? How would you feel if your child reports to you that his teacher said ‘you came late and you are standing at the domot’? Funny right? But imagine an uneducated parent hearing that, he may not know it is wrong because he will understand the meaning immediately. I believe the authorities should pull its educational resources together and look critically at the issue of the Nigerian pidgin. Do we standardize it? Can we specify environments where it is used? Do we have enough English teachers in schools to teach children correctly so the cases of borrowing are reduced? Is there a pidgin dictionary or should we let the language evolve daily? We need to take a stand on this, not just for today, but the future seeing the growing trend in Pidgin English against the standard English.

This article was first published on 28th March 2016

Since Nigeria gained independence from the British in 1960, leading figures like Nnamdi Azikiwe, Obafemi Awolowo, and Ahmadu Bello amongst others have been celebrated as freedom fighters and dominated the Nigerian mainstream history. However, there are various unsung heroes of Nigeria’s independence – the youths. There have been opinions that the Nigerian youth were nowhere … END_OF_DOCUMENT_TOKEN_TO_BE_REPLACED

The journey of becoming a successful businessperson in Nigeria is way too different from other climes. Nigeria is a peculiar terrain and it requires peculiar strategies if you are going to stay afloat in the business world of Nigeria. The truth is, running a business in Nigeria is three times difficult compared to Europe … END_OF_DOCUMENT_TOKEN_TO_BE_REPLACED

Abdulrasheed Bawa was handpicked to be the next chairman of the EFCC in a rather eventful week in national politics. Many have raised eyebrows for a number of reasons. Prominent amongst them is his age; the man is only forty-as he is pretty young for a Nigerian….. anything for that matter. Read more about politics … END_OF_DOCUMENT_TOKEN_TO_BE_REPLACED

As Nigeria commemorates her diamond jubilee anniversary of its independence, this year’s celebration should be a little bit different from the previous ones. Instead of the commemoration being a cause for celebration, it should be a period for a re-evaluation of strategies for success beyond the pandemic. With the Nation experiencing the ‘heptilema (seven and … END_OF_DOCUMENT_TOKEN_TO_BE_REPLACED