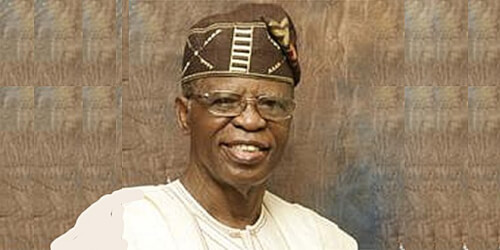 Joseph Oladele Sanusi was born on 24 September 1938 in Ogbagi-Akoko, Ondo State, Nigeria. He studied at South West London College and Kingston College of Technology, England from 1962 to 1965, qualifying as a Chartered Accountant. He became a member of the Institute of Chartered Accountants of Nigeria (ICAN) in 1969 and became a fellow of the Nigerian Institute of Bankers in 1987.

Sanusi worked first as an Accountant in England, then with the Department of Customs and Excise in Nigeria. He joined the Central Bank of Nigeria (CBN) in 1966 as a Deputy Manager. He became a Departmental Director in 1977, Chief Executive of the Securities and Exchange Commission (1978–1979), Executive Director, Monetary and Banking Policy (1979–1984), and Deputy Governor (1988–1990). Sanusi left the CBN to become managing director and Chief Executive of the United Bank for Africa (1990–1992), then managing director and Chief Executive of First Bank of Nigeria (1992–1998). He was also Vice-Chairman of Nigeria Merchant Bank and Chairman of Banque Internationale du Benin.

Governor of the Central Bank

In May 1999 Sanusi was appointed Governor of the Central Bank of Nigeria by President Olusegun Obasanjo, serving until May 2004. Sanusi was picked as a safe and conservative banker. He quickly introduced foreign exchange controls in an effort to reduce the drain on foreign reserves which had fallen from over $7 billion to under $4 billion in the last two years, and to defend the Nigerian naira. Oil revenues, the primary source of foreign exchange, had dropped below the level needed to cover basic requirements. The business community was hostile to the efforts to prop up the currency, believing that devaluation coupled with exchange market reform was necessary.

Noteworthy Contributions at the Central Bank

The Central Bank made remarkable progress under his leadership, some of which are the following:

Sanusi should also be credited with the banking sector initiative in financing the Small and Medium Scale Enterprises (SME). He led the banking sector delegation (as part of the Presidential Team) to Singapore and Indonesia in 2003 mainly to study how the Asian Tigers had been able to support the SMEs to power the impressive growth recorded in this region in the past decades. The trip was an eye-opener and soon afterwards, the Bankers’ Committee established the popular Small and Medium Enterprises Equity Investment Scheme (SMEEIS) which has gone a long way in supporting Nigeria’s SME, a feat still being sustained by the Central Bank of Nigeria and the Bankers’ Committee today.

On 7 October 2004, he was appointed to the board of directors of Lafarge Cement Wapco, a cement manufacturing company in Nigeria owned by Lafarge of Paris. Other post-CBN appointments include Chairman of Standard Chartered Bank Nigeria, First Pension Funds Custodian, Santrust Securities, STI Consulting and Global Biofuels, and Director of West African Portland Cement and Marina Foods.

In 2002, Sanusi was awarded the rank of Commander of the Order of the Niger (CON). In May 2004, Sanusi voluntarily retired and handed over to Charles Chukwuma Soludo.