Lekki Massacre: Nigerians Take To The Streets To Remember Victims 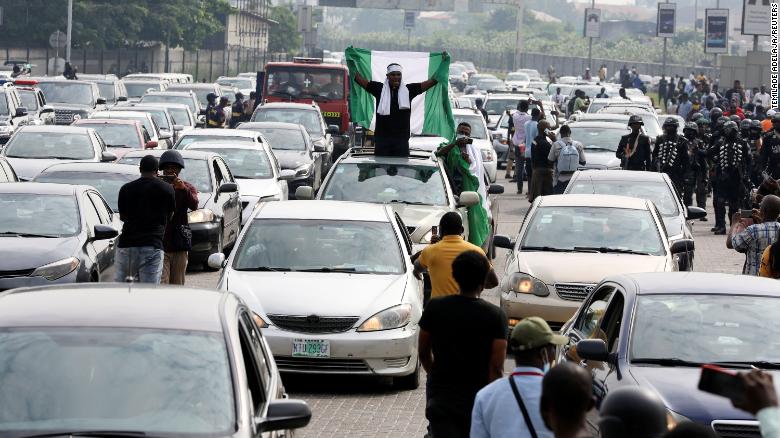 42
SHARES
ShareTweetWhatsappSave
Mail
Despite warnings and threats by the Nigerian police to arrest citizens who will come out for a peaceful one-year memorial for victims of the Lekki Massacre, Nigerians especially the youth in the soro soke (speak up) spirit refused to be silenced and came out in a show of solidarity for a movement the government thinks it has crushed. Read more about Politics It will be recalled that in October 2020, Nigerians took to the streets of Lagos and other Nigerian cities to protest against the activities of a notorious unit of the Nigerian police force SARS (Special Anti-Robbery Squad). The protesters also called for an end to police brutality and urged the government to reform the Nigerian police. However, events would turn bloody on the night of October 20, 2020, as peaceful protesters were shot by the army and police at the Lekki toll gate in Lagos State, wounding and killing some protesters in the process. Sign up to the Connect Nigeria daily newsletter Following the events of October 20, protesters returned home, but the memories of the bloody night have remained firm in the minds of Nigerians. Citizens would not have their voices silenced as they trooped to the streets of Lagos (Lekki toll gate) and Abuja in hundreds to remember victims of October 20, 2020. Characteristically, stern-looking policemen would have none of the solidarity songs, waving flags, and car horns tooting as some protesters and journalists at the scene have been beaten and arrested. It remains to be seen the explanation of the Nigerian government for the police clampdown on citizens who have decided to show solidarity for a peaceful course. Featured Image Source: CNN Got a suggestion? Contact us: editor@connectnigeria.com

This article was first published on 20th October 2021

A Permanent Voters Card is something that every Nigerian desires to have right now. The General Elections in 2023 are less than a year away. Read more about Politics Here’s something you should know: the Continuous Voter Registration activity was launched by the Independent National Electoral Commission (INEC) in June 2021. This registration exercise is … END_OF_DOCUMENT_TOKEN_TO_BE_REPLACED

Following the resignation of Boris Johnson as Prime Minister of the UK on 7 July 2022, 46-year-old Nigerian-born woman, Kemi Badenoch among seven otherrs has been tipped to succeed Boris as Prime Minister. Similarly, other nominees who received at least 20 nominations to become the UK Prime Minister include Suella Braverman, Jeremy Hunt, … END_OF_DOCUMENT_TOKEN_TO_BE_REPLACED

Peter Obi believes Baba-Ahmed is reputable for the position of a vice president if he wins in 2023. Read more about News After weeks of deliberation and consultations, Nigeria’s Labour Party on Friday, July 8, 2022, unveiled Senator Yusuf Datti Baba-Ahmed as the running mate of Peter Obi in the 2023 presidential election. The unveiling … END_OF_DOCUMENT_TOKEN_TO_BE_REPLACED