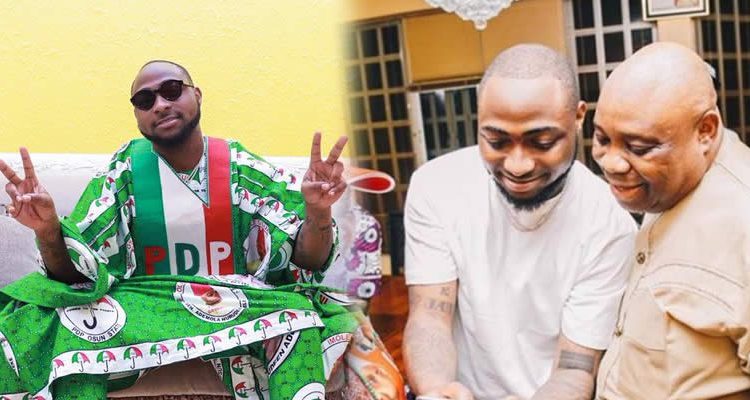 38
SHARES
ShareTweetWhatsappSave
Mail
Davido‘s active involvement in the Osun State Election campaigns has caught the attention of a lot of Nigerians. One of such people is Nollywood actress, Ireti Doyle, who talked about it on her Instagram page. The Instagram post had a picture of the Assurance crooner dressed in the opposition party’s colours. The veteran actress said that Nigeria would not be in the current political and socio-economic situation if Nigerians had been as passionate about politics, and aggressively supported their candidate as much as the singer was doing. She further urged Nigerians to get their permanent voters cards and passionately support their preferred candidate in the upcoming elections next year. The singer has been at the forefront of youth mobilization for his uncle, Senator Ademola Adeleke, who is running for governorship in the state under the PDP umbrella. Ireti Doyle has been a social commentator for a while, using her social media platforms and her blog.


Who he’s campaigning for and why is immaterial and beside the point. The way i see it, if a quarter of us got involved and pursued our political preferences with as much passion, single-mindedness, loyalty, doggedness and “we die here” fervour that @davidoofficial has displayed and sustained over the last several days, it’s safe to say that the last 2 decades probably wouldn’t have gone down the way they have and we probably wouldn’t be in the current socio-political situation we are in. It doesn’t matter how cerebral or articulate you are; back seat driving and arm chair political analysis don’t change a thing. Everyone is analysing what A, B, C and D are doing, the real question is what are you doing? How are you getting involved? What is your political preference and how are you ensuring that you are effectively represented? Alas, classic Nigerianese, you no go do, person wey gree do will be damned for doing..Na so! DavidO has found his “why”. I am PVC ready currently on the look out for my “why”. A candidate who’s politics I agree with, who I feel I can trust. #BeActivelyInvolved#ArmChairCriticsNeverChangedAThing#GetYourPVC#AggresivelySupportTheCandidateOfYourChoice

This article was first published on 26th September 2018

A Permanent Voters Card is something that every Nigerian desires to have right now. The General Elections in 2023 are less than a year away. Read more about Politics Here’s something you should know: the Continuous Voter Registration activity was launched by the Independent National Electoral Commission (INEC) in June 2021. This registration exercise is … END_OF_DOCUMENT_TOKEN_TO_BE_REPLACED

Following the resignation of Boris Johnson as Prime Minister of the UK on 7 July 2022, 46-year-old Nigerian-born woman, Kemi Badenoch among seven otherrs has been tipped to succeed Boris as Prime Minister. Similarly, other nominees who received at least 20 nominations to become the UK Prime Minister include Suella Braverman, Jeremy Hunt, … END_OF_DOCUMENT_TOKEN_TO_BE_REPLACED

Peter Obi believes Baba-Ahmed is reputable for the position of a vice president if he wins in 2023. Read more about News After weeks of deliberation and consultations, Nigeria’s Labour Party on Friday, July 8, 2022, unveiled Senator Yusuf Datti Baba-Ahmed as the running mate of Peter Obi in the 2023 presidential election. The unveiling … END_OF_DOCUMENT_TOKEN_TO_BE_REPLACED