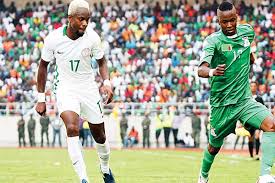 34
SHARES
ShareTweetWhatsappSave
Mail
Without a doubt, Nigerians are one of the most passionate football fans on earth and would go the extra mile to show their support for the country’s national football teams when the occasion calls for it. After narrowly qualifying for the 2010 FIFA World Cup, the Late Shuaibu Amodu led Super Eagles squad would file out for the 2010 Africa Cup of Nations in Angola in the quest for African glory. A 3-1 loss to Egypt in their first game was no good news for the passionate Nigerian football fans but a 1-0 win in their second game against the Benin Republic, backed up by a 3-0 victory over Mozambique in their last group game meant the Eagles had a big task ahead in the quarterfinals against the Chipolopolos (copper bullets) of Zambia. Read more about Sports The game which held on January 25, 2010, at the Estadio Alto da Chela with an attendance of 10,000,  saw Nigerians present in Angola grace the stadium with their green white green flags, while fans back home watched from their television sets as the centre referee unleashed hostilities with the whistle. The game would drag on to extra time after both teams failed to find the back of the net. Nigerians had the heroics of Vincent Enyeama to thank as he made some remarkable saves to keep the game at a stalemate alongside a block from Nigerian defender, Yusuf Mohammed. Things would get worst for the Eagles in the first half of extra time after Onyekachi Apam was shown a red card in the 107th minute, but Nigerians in their usual manner did not cease support backed up by prayers for their national team. The game would be decided by penalties after the Chipolopolos failed to use the advantage of the red card shown Apam. Sign up to the Connect Nigeria daily newsletter Vincent Enyeama was undoubtedly Nigeria’s hero of the night. After making excellent saves during the game, his penalty shot stood out as the best as Nigeria went on to win the game 5-4  on penalties and book a spot in the semi-final against the Black Stars of Ghana Sources ESPN Sky Sports Featured image source: Complete Sports Got a suggestion? Contact us: editor@connectnigeria.com

This article was first published on 4th March 2021

Nigeria occupies the 8th spot on the medals table. Nigeria’s medal haul in the ongoing 2022 Commonwealth Games in Birmingham, United Kingdom, increased to 13 on Thursday, August 4, 2022, after Team Nigeria added four medals. Three out of the four medals were won in Para Powerlifting while one medal came from Women’s Discus Throw. … END_OF_DOCUMENT_TOKEN_TO_BE_REPLACED

The Spanish-based stars were outstanding in Nigeria’s campaign at the continental showpiece. Read more about Sports Nigerian national women’s football team stars, Rasheedat Ajibade and Osinachi Ohale, have been named in the 2022 Women’s Africa Cup of Nations (WAFCON) Best XI. The duo was instrumental to Nigeria’s campaign at the tournament which saw them qualify … END_OF_DOCUMENT_TOKEN_TO_BE_REPLACED

In the space of one week, four Nigerian women have achieved feats that brought some form of respite to the nation in the midst of a tension-ridden political climate. Read more about Sports Asisat Oshoala set the ball rolling on the 21st of June, 2021 when she won the African Player of the year; her … END_OF_DOCUMENT_TOKEN_TO_BE_REPLACED