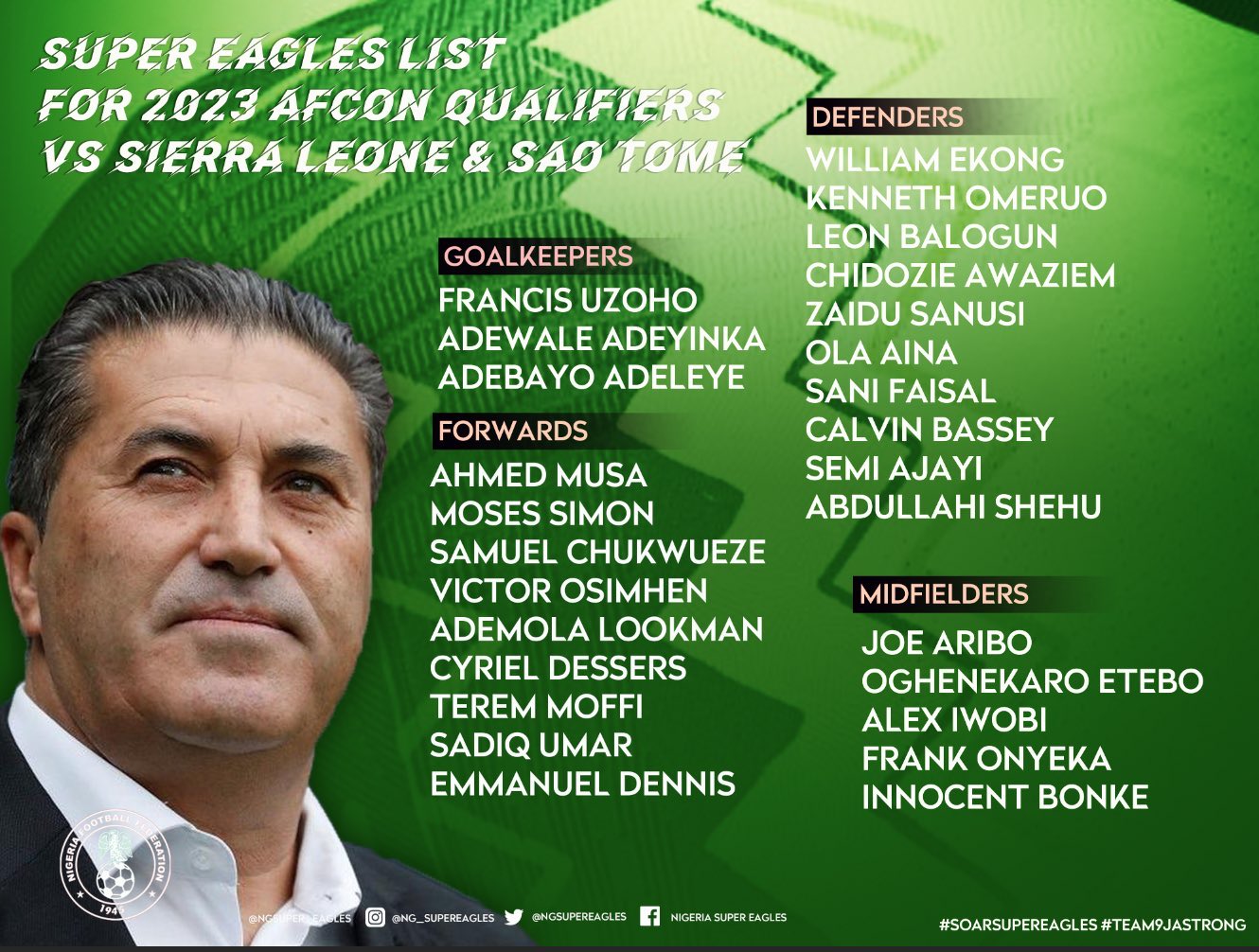 Nigeria will be aiming to reestablish dominance in African football after failing to qualify for the 2022 FIFA World Cup in Qatar.

Read more about Sports Head coach of the Super Eagles of Nigeria, Jose Peseiro, has handed invitations to 27 players ahead of Nigeria’s 2023 Africa Cup of Nations qualifiers against Sierra Leone and Sao Tome and Principe. Peseiro is set for his competitive outing with the three-time African champions when the qualifiers commence after failing to register a win in his first two games (international friendlies against Mexico and Ecuador). Nigeria will host the Lone Stars of Sierra Leone at the MKO Abiola International Stadium, Abuja on June 9, 2022, before travelling to Sao Tome and Principe for their second game on June 13.

Furthermore, Israeli-based goalkeeper Adebayo Adeleye who plays for Hapoel Jerusalem is set to make his debut for Nigeria after earning his first senior national team call-up.

This article was first published on 6th June 2022

Nigeria occupies the 8th spot on the medals table. Nigeria’s medal haul in the ongoing 2022 Commonwealth Games in Birmingham, United Kingdom, increased to 13 on Thursday, August 4, 2022, after Team Nigeria added four medals. Three out of the four medals were won in Para Powerlifting while one medal came from Women’s Discus Throw. … END_OF_DOCUMENT_TOKEN_TO_BE_REPLACED

The Spanish-based stars were outstanding in Nigeria’s campaign at the continental showpiece. Read more about Sports Nigerian national women’s football team stars, Rasheedat Ajibade and Osinachi Ohale, have been named in the 2022 Women’s Africa Cup of Nations (WAFCON) Best XI. The duo was instrumental to Nigeria’s campaign at the tournament which saw them qualify … END_OF_DOCUMENT_TOKEN_TO_BE_REPLACED

In the space of one week, four Nigerian women have achieved feats that brought some form of respite to the nation in the midst of a tension-ridden political climate. Read more about Sports Asisat Oshoala set the ball rolling on the 21st of June, 2021 when she won the African Player of the year; her … END_OF_DOCUMENT_TOKEN_TO_BE_REPLACED