Do You Know? Emmanuel Arinze Ifeajuna Was The First Black African To Win A Gold Medal At An International Sports Event 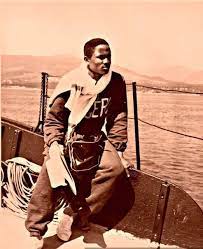 88
SHARES
ShareTweetWhatsappSave
Mail
An Igbo from Onitsha, Anambra State, he was a science graduate of the University College of Ibadan and became involved in politics, later joining the military.  Emmanuel Arinze Ifeajuna was a Nigerian army major and high jumper. He was the first Black African to win a gold medal at an international sports event when he won at the 1954 British Empire and Commonwealth Games. His winning mark and personal best of 6 ft 8 in (2.03 m) was a games record and a British Empire record at the time. Read more about Do you know

Born in Onitsha in 1935, Emmanuel Arinze Ifeajuna attended Dennis Memorial Grammar School in his hometown and displayed the characteristics that would later define his life. He trained in the high jump under his games teacher, and he also took part in a protest that closed down the school for a term. He graduated from high school in 1951. Ilesa Grammar School also claims him as a past alumnus. This is disputed, although he did do summer school teaching at the institution. The 1954 Nigerian Athletics Championships saw him establish himself among the nation’s best high jumpers. A jump of 6 feet 5.5 inches (1.97 m) meant Ifeajuna was chosen to represent his country at the 1954 British Empire and Commonwealth Games, alongside Nafiu Osagie. Nigeria performed well internationally in the high jump in that period – Joshua Majekodunmi had been runner-up at the 1950 British Empire Games, and three Nigerian jumpers made the top twenty at the 1952 Olympic high jump. At the 1954 Games in Vancouver, he competed wearing only his left shoe yet managed to clear 6 ft 8 in (2.03 m), which was both a Games record and a British Empire record for the discipline. The resulting gold medal made him the first Black African to win at a major international sports competition. The high jump had an African sweep of the medals that year, with Uganda’s Patrick Etolu finishing behind Ifeajuna and Nigeria’s Osagie taking third place. Sign up for the Connect Nigeria daily newsletter Ifeajuna received a hero’s welcome upon his return to Lagos and was paraded through the streets before speaking at a civic celebration.

After his gold medal win, he ceased training in the high jump and did not return to the sport. He enrolled in a science degree at the University College of Ibadan in 1954 and became involved in the institution’s student politics movement. He was also a member of the prestigious Sigma Club, University of Ibadan, a socio philanthropic student organization, and organizers of the annual Havana Musical Carnival in the institution. While there he became close friends with Christopher Okigbo and J.P. Clark, both of whom would go on to become prominent Nigerian poets.  Upon completion of his science degree, he went into teaching, being posted at Ebenezer Anglican Grammar School in Abeokuta. Ifeajuna remained in regular contact with Okigbo, who also went on to teach, and the two continued to discuss revolutionary politics. Register to attend the Connect Nigeria Business Mixer This culminated in Ifeajuna leaving the teaching profession to join the army in 1960. He underwent training at Mons Officer Cadet School in Aldershot, United Kingdom. As a graduate, he rose quickly within the military ranks and reached the position of Major in January 1966. He was the brigade major in Lagos. Ifeajuna’s legacy within Black African sports history has been overshadowed by his political actions following his feats. He died on the 25th of September, 1967.

Cupcakes are mini cake perfections. They are delicious and portable. They are easy to bake and decorate. They even come in different flavours and are widely served at birthdays and weddings. Cupcakes are said to make everything better. Read more about Did You Know? So, today, we’ll be sharing fun facts about Cupcakes that you’d … END_OF_DOCUMENT_TOKEN_TO_BE_REPLACED

Today is all about the kitchen gadget, the Air fryer. For your information, the air fryer is a kitchen appliance that’s designed to circulate hot air and in some cases hot oil around food in order to cook it. So, what do you think of this gadget? Read more about Did you know? Have you … END_OF_DOCUMENT_TOKEN_TO_BE_REPLACED

We are in an election year, preparing for 2023 polls that will define the fate of the nation. Many people are hurrying to secure visas and passports, with plans to travel internationally, should things go sideways next year. Read more about Did you know? While they will tell you their travel plans are totally unrelated … END_OF_DOCUMENT_TOKEN_TO_BE_REPLACED

The long holiday for the kids is approaching. Smart parents are already making plans to engage their kids during the break. For some, travelling is on the list. While for others, a staycation or daycation at least once a week or bi-weekly is the plan. Read more about Did you know? If you do take … END_OF_DOCUMENT_TOKEN_TO_BE_REPLACED