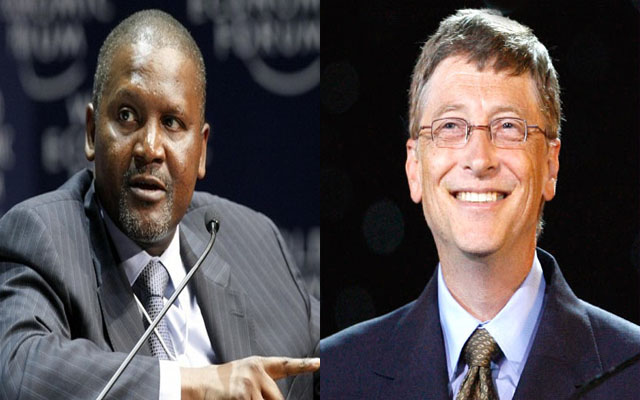 William H. Gates, founder and chairman of Microsoft Corporation, has become the world’s richest man, again. The billionaire philanthropist achieved his new status as a result of an increase of $15.8 billion in his fortune in 2013, according to Bloomberg’s Billionaire Index. Microsoft’s shares soared by 40 percent in the previous year, which earned Gates substantial earnings. He took over as world’s richest man from Carlos Slim, Mexican investor and owner of American Movil SAB, who lost $1.4 billion in the said year due to a law introduced by the Mexican parliament to check the billionaire’s economic dominance. American Movil SAB lost 12 percent market shares in the first quarter of 2013. Nigeria’s business magnate and industrialist, Alhaji Aliko Dangote, also, made positive strides in 2013 due to gains and expansions in his business empire that saw him netting $9.2 billion in 2013. The billionaire who is also recording a growth of a different kind on Twitter is currently the 30th richest man in the world.

This article was first published on 3rd January 2014

The E-Commerce sector in Africa is growing rapidly with Nigeria’s social commerce market estimated to reach US$23.8 billion by 2028. This is why some startups are now delving into the sector to get a piece of the action. Recently a former payments company( Abeg) rebranded to a Pocket app to power both payments and online … END_OF_DOCUMENT_TOKEN_TO_BE_REPLACED

Technology helps make your business more efficient. It also enables you to engage with your customers and promote your business. Another thing it helps you do is to attract new customers, serve them and retain them. Many tech-driven solutions are available to help you attract new customers. However, there are some factors to consider before … END_OF_DOCUMENT_TOKEN_TO_BE_REPLACED

MAX.ng is one of the leading mobility players in the Nigerian and African mobility tech space. Since its inception, it has strived to combine its resources towards moving people and goods within Africa easily, efficiently and safely. But not without some challenges. First was the Lagos okada ban in the first quarter of 2020. Followed by … END_OF_DOCUMENT_TOKEN_TO_BE_REPLACED

An online community is a group of people who share a common interest or purpose and communicates via the Internet. Online communities are similar to those groups people belong to such as age grades, trade unions, and village groups except that it is not physical. Often, you can find some of these groups planning events … END_OF_DOCUMENT_TOKEN_TO_BE_REPLACED