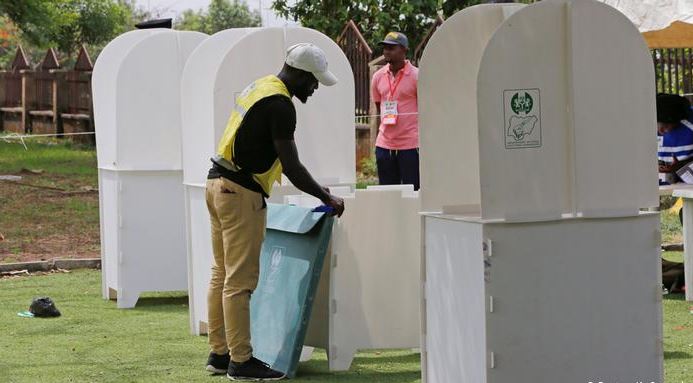 25
SHARES
ShareTweetWhatsappSave
Mail
The ruling party at the national level, the All Progressives Congress (APC) began to show signs of internal scuffles this year when they embarked on their party member registration at the ward level. Inconclusive registration, accusations, counter-accusations, violence among party bigwigs and their loyalists became the order of the day. Read more about Politics The Minister of Information, Alhaji Lai Mohammed, accused the Kwara state governor of rigging the party membership registration while asking that the process be scrapped. Some individuals are also in court challenging the unconstitutional leadership of APC caretaker chairman, Buni Yadi. The major opposition party, the People’s Democratic Party (PDP), on its own part, started having internal rancour when they were about to begin their innovative e-Registration scheme. While the PDP seemed to have temporarily calmed the fire, its own internal crisis had factional leaders demanding the resignation of its National Executive Council led by Uche Secondus. This shows that the problem of the PDP seems different. Although they are all linked to power play among the blocs of politicians positioning for leverage in the coming 2023 elections. One thing that is common in the mindset of these politicians across the board is that they have started scrambling for the slots and tickets that the 2023 elections hold in store. And they would stop at nothing to get it. Alliances have started building too. Former Senate President, Bukola Saraki, gathered together ex-National Assembly members of the PDP at the Transcorp Hilton on Thursday. Sign up to the Connect Nigeria daily newsletter The APC National Leader, Bola Ahmed Tinubu, has also had people visiting him at a London residence since he has been there recuperating from an undisclosed condition. The power brokers will stop at nothing to keep the polity constant while promising tonnes of opportunities if the electorate counts them worthy of being voted. Youth blocs are equally wondering and strategising behind the scenes on how to push the political old guard out of the seat of power. The youths have been pondering if will be better to form a powerful Third Force or to join either of the two most prominent political parties – APC or PDP. The reality, however, is that it is too late for youths to consider forming a Third Force. Voting out a dominant party requires huge funds, cooperation, mobilisation and synergy. That takes time. And with electronic transmission of results removed from the Electoral Act, 2023 may not be so different from 2019. Not many Nigerians are confident that allegations of rigging will not riddle the coming polls. However, if President Muhammadu Buhari cares about leaving a resounding legacy, he may want to deliver credible elections just as President Goodluck Jonathan did in 2015. Featured Image Source: News Central TV Got a suggestion? Contact us: editor@connectnigeria.com

This article was first published on 23rd August 2021

A Permanent Voters Card is something that every Nigerian desires to have right now. The General Elections in 2023 are less than a year away. Read more about Politics Here’s something you should know: the Continuous Voter Registration activity was launched by the Independent National Electoral Commission (INEC) in June 2021. This registration exercise is … END_OF_DOCUMENT_TOKEN_TO_BE_REPLACED

Following the resignation of Boris Johnson as Prime Minister of the UK on 7 July 2022, 46-year-old Nigerian-born woman, Kemi Badenoch among seven otherrs has been tipped to succeed Boris as Prime Minister. Similarly, other nominees who received at least 20 nominations to become the UK Prime Minister include Suella Braverman, Jeremy Hunt, … END_OF_DOCUMENT_TOKEN_TO_BE_REPLACED

Peter Obi believes Baba-Ahmed is reputable for the position of a vice president if he wins in 2023. Read more about News After weeks of deliberation and consultations, Nigeria’s Labour Party on Friday, July 8, 2022, unveiled Senator Yusuf Datti Baba-Ahmed as the running mate of Peter Obi in the 2023 presidential election. The unveiling … END_OF_DOCUMENT_TOKEN_TO_BE_REPLACED