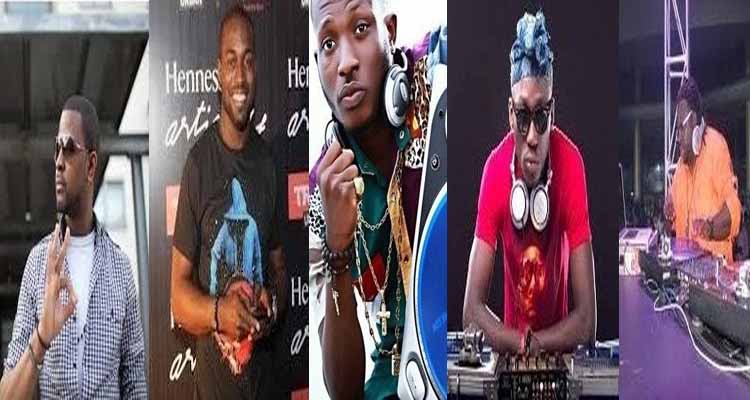 Jimmy Jatt is regarded as the king of the disc jockey business in Nigeria. However, there are more than a bunch of skillful hands in the industry that rock the sound waves with a motley of hot music with their artistry of spinning record discs. Connect Nigeria takes a look at five DJs: DJ Neptune, DJ Xclusive, DJ Spinall, DJ Humility and DJ KenTalky; all five are currently rocking the industry and are as good as Jimmy Jatt. In mid-December 2013, four of these Deejays, DJ Humilty, DJ Xclusive, DJ Neptune and DJ Jimmy Jatt, were all part of the Gulder Club Ultimate held at Eko Hotel where all 4 DJs were involved in musical battle while also pleasing fans that were at the exclusive party.   DJ Neptune Neptune is one of the prolific disc jockeys in the music industry. Named Imohiosen Patrick, DJ Neptune who is from Edo State, but born and brought up in Lagos State, started out as radio DJ and once worked with Ray Power FM before becoming a freelance DJ and performing at international and national concerts.

Neptune has produced a mixtape titled ‘Everblazing’ which has the hit song, 123 featuring M.I, Dagrin and Naeto C. He is currently working on an album that is yet to be titled. DJ Neptune has been nominated for several awards which includes Best World DJ at the 2008 ‘NEA’ Nigeria Entertainment Awards in New York, U.S.A.  Winner as Best World DJ at the 2009 ‘NEA’ Nigeria Entertainment Awards in D.C, U.S.A. 2009;  Tush Award Best DJ in Nigeria, 2010; International Best DJ at the first “AEA” Africa Entertainment Awards in Malaysia. He is currently the official DJ to rapper, Naeto C.   DJ Xclusive Born Rotimi Alakija in the United Kingdom to Nigerian parents; at an early age, he moved to Nigeria for his high school education at King’s College, Lagos after which he he proceeded to the higher institution to get a degree in financial computing.

Signed on to EME as an artiste, Xclusive began his DJ career at various clubs such as Vendome, Tribeca and now an on-air radio DJ at Cool FM Lagos, Vee-Jay at Channel O and he is also the official DJ to afro-pop sensation, WizKid. DJ Xclusive has received several awards including the 2010 Nigerian Entertainment Award for “World Best DJ”. He also got nominated as “Best DJ ” at BEFFTA Awards.   DJ Spinall Currently the official DJ to pop act, Wande Coal, Beat 97.9 FM Ibadan and the weekly Industry Nite, DJ Spinall is gradually building his brand in the crowded music industry as he his known by the trade name, “the Cap” or “Unstoppable Dj Spinall”. With his frequent mixtape titled The Cap getting attention online, Sodamola Oluseye Desmond, better known as DJ Spinall explains that his stage name signifies the fact that he plays all genre of music, thus, the name “Spin-all”.

He went to several DJ schools and was schooled by the legendary DJ Slim, DJ Hotega and DJ Jimmy Jatt. He holds a bachelor’s degree in Electrical Electronics Engineering. Unstoppable DJ Spinall has worked as a DJ on Ray Power FM and Eko FM, both in Lagos. He recently launched a party mixtape titled The Crazy Azz Party Mix a.k.a The Cap as a symbol of his noticeable style of dressing. He added the traditional cap (Fila) to his outfit tracing his roots back to the Yoruba race and culture. The Cap has since then been his identity.   DJ Humility DJ Humility, whose real name is Benedict Afagwu, started making waves when he clinched the first place position at the Benson & Hedges DJ Championship in the early 2000s. About the same time, he was voted as Nigeria’s best radio DJ at the Gbedu Awards; in 2003, he won an award at the Fanta Fame Awards.

He has gone on to perform at some of the biggest concerts and shows in Africa and is currently working on penetrating the music industry abroad. Humility is currently a radio DJ at Rhythm 93.7 FM in Lagos Nigeria.   DJ Kentalky Known for his various mixes, DJ Kentalky, real name Ifeoluwa Ibrahim Ozimah, is a rising disc jockey and artiste in the music industry. He is also an in-house DJ at Naija FM.

He began his disc jockey career back in 2001 and was part of the MTV Guinness Extra Smooth Train to Abuja and Benin. His excellent skills have also given him the opportunity to work with international disc jockey, Mannie. He is set to release his debut album soon, which is titled Unstoppable. The project features artistes such as Olamide, Terry G, Tillaman, Skales, Hakym Lamba and several other stars.

This article was first published on 8th January 2014

The week has ended and we have compiled a list of all the entertainment highlights of the week for you. Surely, it was a roller coaster ride, and what other fun way to get into the weekend groove than to bring to your remembrance all the stuff that happened in Nigeria since Monday of this … END_OF_DOCUMENT_TOKEN_TO_BE_REPLACED

Tems has established a presence as one of the biggest Afrobeats stars in global music. She has collaborated with international acts such as Drake and Justin Bieber. Read more about News Superstar singer TemiladeOpeniyi, popularly known as Tems made history on Sunday, June 26, 2022, at the Microsoft Theatre, Los Angeles, USA after emerging the … END_OF_DOCUMENT_TOKEN_TO_BE_REPLACED

The week has ended and we have compiled a list of all the entertainment highlights of the week for you. Surely, it was a roller coaster ride, and what other fun way to get into the weekend groove than to bring to your remembrance all the stuff that happened in Nigeria since Monday of this … END_OF_DOCUMENT_TOKEN_TO_BE_REPLACED

At the age of 26, Ckay has established his presence as one of the fastest-rising global acts in Afrobeats since ‘Love Nwantiti’ shot him to the limelight in 2021. Read more about News Nigerian singer and producer Chukwuka Ekweani popularly known by the stage name Ckay has made history after his hit track ‘Love Nwantiti’ … END_OF_DOCUMENT_TOKEN_TO_BE_REPLACED