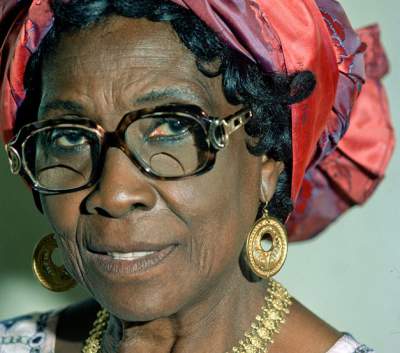 When we talk politics in Nigeria, women are hardly seen at the forefront. But a daring woman who stopped at nothing to enter the political arena with the strongest of men in the early history of Nigeria changed that narrative.

This icon was born Oyinkansola Ajasa to Sir Kitoye Ajasa, a prominent Yoruba who was the first Nigerian to be knighted by the British, and Lucretia Olayinka Moore, a princess of Egba royal family, in Lagos, on March 6, 1897.

Oyinkan schooled at the Anglican Girls’ Seminary, Lagos, from where she graduated in 1909. She completed her training in music at the Royal Academy of Music in London in 1917, right after finishing from the Young Ladies Academy at Ryford Hall, Gloucestershire, England.

Oyinkan dropped her maiden name  – Ajasa – when she married a lawyer named Moronfolu Abayomi in August 1923. Moronfolu Abayomi was, however, assassinated in court two months after the wedding and Oyinkan became widowed.

Oyinkan did not allow this tragedy to stop her in her tracks to greatness as she soon continued in her quest of educating women and girls.

She did fundraising and promotions for Queen’s College through another organization which she founded – West African Educated Girls’ Club which opened in 1927. As a founding teacher and the only Nigerian teacher at Queens’ College, she became even more actively involved in the education of women and girls in Nigeria.

She was also one of the earliest women to drive a car in Nigeria after the likes of Funmilayo Ransome-Kuti. In 1930, Oyinkan remarried a doctor named Kofo Abayomi.

As the Nigerian Youth Movement (NYM) which was foundational to the earliest political parties in Nigeria was formed, Oyinkan joined in 1935. She wrote an article in NYM’s journal in 1935, demanding that wealthy women in the country should stand up for the poor and illiterate ones and be willing to work with other women for that goal of women equality.

After making her name in advocacy for better representation of women in the political arena, Oyinkan herself founded the Nigerian Women’s Party on May 10, 1944 – during a meeting with twelve other women at her home.

The organization took to the trenches to advocate for more awareness among women to participate deeper in politics. Her daring effort in this regard, among other reasons, must have necessitated Oyinkan being knighted by the Queen of England in 1954 as she became known as Lady Abayomi.

Among other chieftaincy titles which Oyinkan Abayomi was honoured with, being named the Iya Abiye of Egbaland stood out. Oyinkan died on March 19 1990 at the age of 93.

This article was first published on 20th December 2019

A Permanent Voters Card is something that every Nigerian desires to have right now. The General Elections in 2023 are less than a year away. Read more about Politics Here’s something you should know: the Continuous Voter Registration activity was launched by the Independent National Electoral Commission (INEC) in June 2021. This registration exercise is … END_OF_DOCUMENT_TOKEN_TO_BE_REPLACED

Following the resignation of Boris Johnson as Prime Minister of the UK on 7 July 2022, 46-year-old Nigerian-born woman, Kemi Badenoch among seven otherrs has been tipped to succeed Boris as Prime Minister. Similarly, other nominees who received at least 20 nominations to become the UK Prime Minister include Suella Braverman, Jeremy Hunt, … END_OF_DOCUMENT_TOKEN_TO_BE_REPLACED

Peter Obi believes Baba-Ahmed is reputable for the position of a vice president if he wins in 2023. Read more about News After weeks of deliberation and consultations, Nigeria’s Labour Party on Friday, July 8, 2022, unveiled Senator Yusuf Datti Baba-Ahmed as the running mate of Peter Obi in the 2023 presidential election. The unveiling … END_OF_DOCUMENT_TOKEN_TO_BE_REPLACED