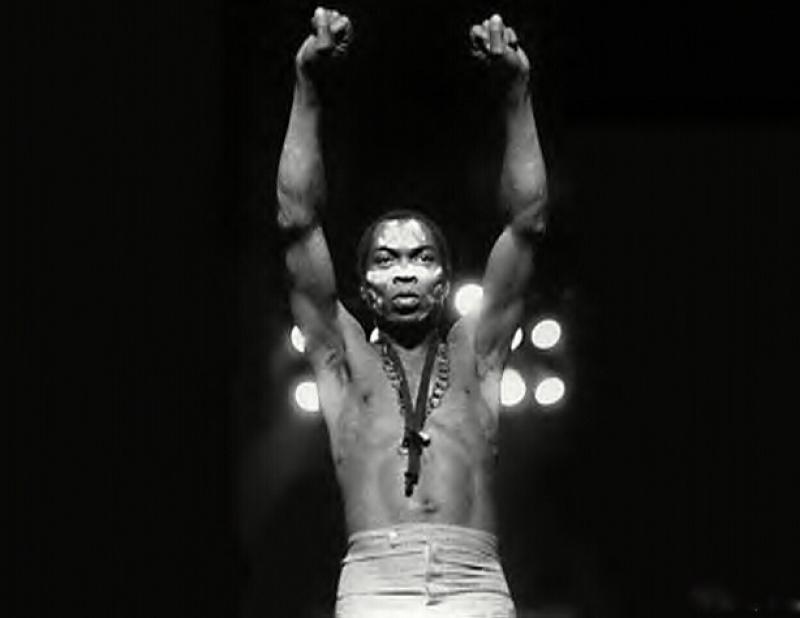 On Sept. 4, 1984, Fela Anikulapo Kuti was stopped at the airport, arrested and imprisoned for 20 months. Fela and his band were attempting to board a plane to New York from Lagos when the arrest happened. They were heading to America for a concert, but that concert did not hold until November 8, 1986, after Fela was released. The arrest was on dubious currency-smuggling charges, and the military tribunal that tried him quickly sentenced him to 5 years in prison. He was released in April, 1986, following the coup that ended Buhari’s military regime.

While Fela was in prison, there was a significant amount of international outcry. Amnesty International declared him a ‘prisoner of conscience’ and began campaigns for his release. Support came from many parts of the world.  It was generally believed that the trial had been unfair, and that Fela was being either punished, silenced, or both, because of the aggressive and unapologetic political views that he propagated with his music. Fela spent 20 months in jail before he was released on the 24th of April, 1986.

It was an important time for Fela, he was approaching the peak of his career. It was the mid-80’s, and back then he was more of a Nigerian superstar than anything else. Even though he was known abroad before his death, it was his passing that truly established him as an African icon on the global stage. In 1986, Fela was still building on the foundation of his talent, and that arrest put his career on hold.

A combination of Babangida’s new government and international activism finally resulted in Fela’s release. He immediately set out on a European tour and a series of concerts in America for Amnesty International. He performed at six ‘Conspiracy of Hope’ concerts for Amnesty International, and in those concerts he played alongside some of the most iconic musical acts of that time, including U2, Sting, Bryan Adams, Peter Gabriel, Lou Reed and Joan Baez. He then went on to perform at the Felt Forum in New York, the concert he had set out for 2 years earlier, in 1984.

The Felt Forum concert was a massive success. It was his first appearance in New York since he had changed the name of his band from Afrika 70 to Egypt 80. A review in the New York Times called the Felt Forum performance a ‘triumphant concert’. The 1984 arrest apparently did nothing but energize Fela’s drive. He began at 8pm and sang past 11pm, performing four songs in three hours: J.L.T. (Just Like That), C.B.B. (Confusion Break Bone), T.D.T.M.N. (Teacher Don’t Teach Me Nonsense) and a new song, Beasts of No Nation, the first song he wrote when he got out of prison. The new song was a specific response to the circumstances surrounding his arrest. In it, he declared “Human rights are my property.” Indeed, they were. It is awe-inspiring, but tragic, that Fela’s words still speak to the issues we face in Nigeria today.

This article was first published on 28th November 2019

2 thoughts on “ThrowBack Thursday: Fela Performs at the Felt Forum, New York In 1986”

The week has ended and we have compiled a list of all the entertainment highlights of the week for you. Surely, it was a roller coaster ride, and what other fun way to get into the weekend groove than to bring to your remembrance all the stuff that happened in Nigeria since Monday of this … END_OF_DOCUMENT_TOKEN_TO_BE_REPLACED

Tems has established a presence as one of the biggest Afrobeats stars in global music. She has collaborated with international acts such as Drake and Justin Bieber. Read more about News Superstar singer TemiladeOpeniyi, popularly known as Tems made history on Sunday, June 26, 2022, at the Microsoft Theatre, Los Angeles, USA after emerging the … END_OF_DOCUMENT_TOKEN_TO_BE_REPLACED

The week has ended and we have compiled a list of all the entertainment highlights of the week for you. Surely, it was a roller coaster ride, and what other fun way to get into the weekend groove than to bring to your remembrance all the stuff that happened in Nigeria since Monday of this … END_OF_DOCUMENT_TOKEN_TO_BE_REPLACED

At the age of 26, Ckay has established his presence as one of the fastest-rising global acts in Afrobeats since ‘Love Nwantiti’ shot him to the limelight in 2021. Read more about News Nigerian singer and producer Chukwuka Ekweani popularly known by the stage name Ckay has made history after his hit track ‘Love Nwantiti’ … END_OF_DOCUMENT_TOKEN_TO_BE_REPLACED