Guess The Nigerian Entertainers In Forbes Africa ’30 Under 30′ List 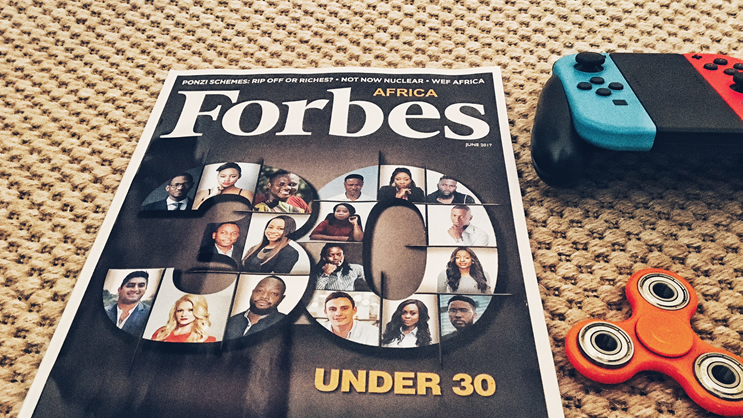 According to the financial publication, the list was released after very careful selection and scrutiny.

“We put in months of rigorous research, sifting through over 600 nominations, vetting them for weeks, verifying and investigating them. We favored entrepreneurs with fresh ideas and took into account their business size, revenue, location, potential, struggles, social impact and resilience. A panel of judges then debated the final 90. You may not know many of their names now and they may not be richest people in Africa, but they could be the billionaires of tomorrow gracing our future covers.”

There are 27 Nigerians on the Under 30 list, and a total of 9 in the creative category, including Yemi Alade, Falz, Wizkid, Davido, Beverly Naya, and Sonia Irabor.

The Afropop singer and songwriter was born 13 March 1989 in Abia state to a Yoruba father and an Igbo mother. She started her music career in 2005 with an all-girl group called Noty Spices but gained prominence after winning the 2009 edition of reality TV show Peak Talent Show. She has three albums, one EP and a number of singles, and is best known for her hit single “Johnny”.

She has won several awards for her work, including the MTV African Music Awards as best female artiste for two years in a row (2015 and 2016).

The singer who has made her money majorly from music and entertainment is currently worth $4.8 million this 2018.

Folarin Falana popularly known as Falz the Bahd Guy is a man of many parts. The 27-year-old singer-songwriter, rapper, actor and TV presenter has an LLB degree and was called to the bar in 2012.

He began his musical career as a member of School Boys, a Lagos based music group. He has had multiple nominations and awards for his music and roles in films. He describes his music style as “Wahzup music”, a fusion of comic lyrics and contemporary hip-hop in faux Yoruba accent. He also fabricated slangs to give him a unique identity.

According to sources, he has an accumulated net worth of about $4.1 million.

Davido, 25, has become a music sensation since the release of His debut album Omo Baba Olowo in 2012.

He is the CEO of the record label Davido Music Worldwide (DMW). He also holds lucrative endorsement deals with telecoms giant MTN Nigeria, as well as Guinness Nigeria among others.

Davido has investments in real estate, in addition to entertainment which he is popularly known for. According to a Forbes publication, Omo Baba Olowo (OBO) is worth $16 million.

He hit the spotlight after signing on to Empire Mates Entertainment and releasing debut song Holla at your boy. Since then he has gone on to make several popular songs and even gained international recognition.  This year, he became the first Afrobeats artist to appear in the 2018 Guinness World Records for his contribution to Drake‘s hit song “One Dance”.

The 27-year-old singer and songwriter holds several mouth-watering endorsements including one with Pepsi initially worth $350,000 in 2012. He was ranked 5th on Forbes 2013 list of the Top 10 Richest/Bankable African Artists.

He is said to charge over N2 million to N4 million for a single show and is worth over $14 Million.

The British-Nigerian actress was born on 17 April 1989. She began acting at 17 in England, and soon became one of the fastest rising actresses in Nigeria since staring in the 2009 Nigerian movie “Guilty Pleasures”.

She has over 20 movies and TV soaps to her credit, including Tinsel and The Wedding Party.

Sonia, the 28-year-old daughter of Betty Irabor publisher and founder of leading inspirational and lifestyle magazine Genevieve Magazine, is an actress, filmmaker, entrepreneur, and writer. She is the co-writer of TV series Inspector K. She started out writing as a columnist in Genevieve Magazine but was last year announced Editor-in-Chief, replacing her mother.

According to Forbes, these are some of Africas next generation entrepreneurs, These ones are already taking the entertainment industry by storm and we hope to see some more in the years to come.

This article was first published on 6th June 2018

Following the resignation of Boris Johnson as Prime Minister of the UK on 7 July 2022, 46-year-old Nigerian-born woman, Kemi Badenoch among seven otherrs has been tipped to succeed Boris as Prime Minister. Similarly, other nominees who received at least 20 nominations to become the UK Prime Minister include Suella Braverman, Jeremy Hunt, … END_OF_DOCUMENT_TOKEN_TO_BE_REPLACED

The week has ended and we have compiled a list of all the entertainment highlights of the week for you. Surely, it was a roller coaster ride, and what other fun way to get into the weekend groove than to bring to your remembrance all the stuff that happened in Nigeria since Monday of this … END_OF_DOCUMENT_TOKEN_TO_BE_REPLACED

The celebration is the biggest Islamic festival in Nigeria. Read more about News As part of celebrations marking the Eid-el-Kabir, the federal government has declared Monday, July 11 and Tuesday, July 12, 2022, as public holidays. This information was made public through a public statement from the Ministry of Interior and signed by the Permanent … END_OF_DOCUMENT_TOKEN_TO_BE_REPLACED

Tems has established a presence as one of the biggest Afrobeats stars in global music. She has collaborated with international acts such as Drake and Justin Bieber. Read more about News Superstar singer TemiladeOpeniyi, popularly known as Tems made history on Sunday, June 26, 2022, at the Microsoft Theatre, Los Angeles, USA after emerging the … END_OF_DOCUMENT_TOKEN_TO_BE_REPLACED