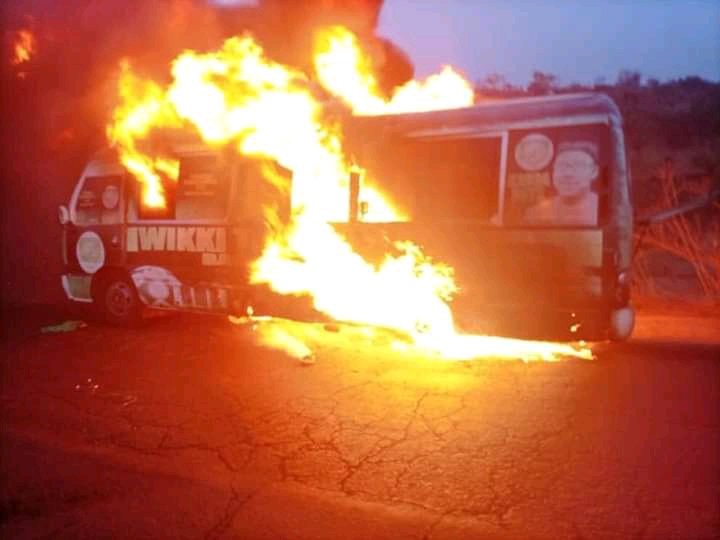 A bus conveying players of Nigeria Professional Football League (NPFL) side, Wikki Tourists, from their Bauchi base to Uyo (the capital city of Akwa Ibom State) for their weekend league game against Dakkada FC, caught fire this morning, Thursday, February 18, 2021, after losing two tires at Hawan Kibo, a town close to Jos (the capital city of Plateau State.

It is still unclear what caused the fire, but the good news is that casualties were not recorded in the incident. Thanks to the fact that the players got out of the vehicle quickly enough after it lost two tires.

The video of the raging fire was posted on social media by Wikki’s midfielder, Damala Promise Ezekiel @Damala33, as he is heard saying, ‘Thank you Jesus’, repeatedly.

This Happened this Morning at Hawan Kibo on Our Way to Akwa Ibom for our Match against Dakkada on Saturday. We lost 2 tyres b4 the Bus Eventually caught Fire.
Thank God for Delivering Us, no Life Was Lost, No One Was Injured. All Glory to God.@LMCNPFL @ShehuDikko @SonOfGrace33 pic.twitter.com/upkif6CkyB

After recording a goalless draw in their last two NPFL games against Lobi Stars and Sunshine Stars, the Giant Elephant (Wikki) were hoping to get a win this weekend in Uyo against a Dakkada side that is hoping to bounce back to winning ways after suffering a 3-0 away loss at the hands of Kwara United at the Ilorin Township Stadium on Sunday, February 14, 2021.

The League Management Committee (LMC) is expected to issue a statement as regards the possibility of Wikki’s away game holding this weekend in the wake of this incident.

Currently, the Usman Abd’Allah led side are placed 10th on the NPFL log after 10 rounds of matches with 13 points, while Dakkada occupies the 9th spot with 14 points from 10 games too.

Today’s incident is a wakeup call to the LMC and NPFL clubs to improve the welfare of players plying their trade in the country. Bus trips for away games are below global standards, it is time to fly professionals in the league for away games.