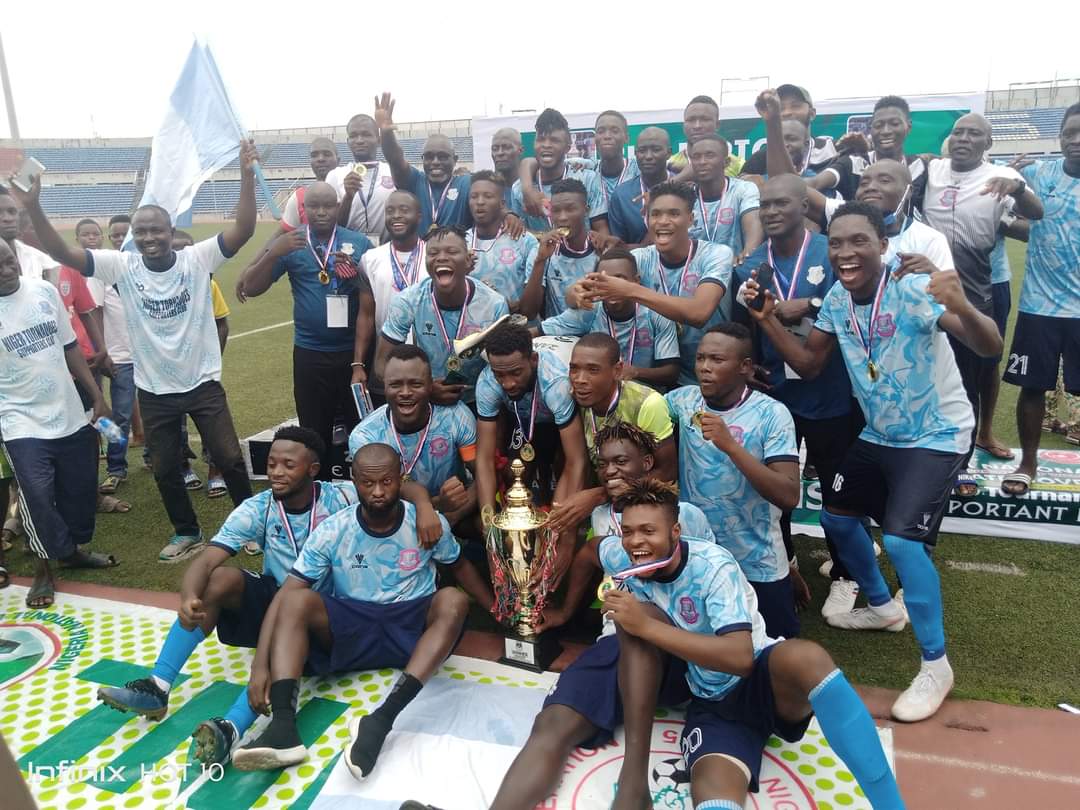 42
SHARES
ShareTweetWhatsappSave
Mail
Nigerian clubs commenced their CAF Champions League campaign on a brilliant note after securing vital wins in the preliminary round of the competition. Nigeria Professional Football League (NPFL) champions, Akwa United, beat visiting Algerian side, CR Belouizdad, 1-0, at the Godswill Akpabio International Stadium, on Sunday, September 12, 2021. Read more about Sports An 87th-minute strike from Friday Ubong made the difference between both sides. In another clash, Rivers United secured an important 1-0 away win against Tanzanian side, Young Africans, in the Benjamin Mkapa National Stadium, Dar es Salaam on Sunday. Samuel Omodumuke gifted the visitors the win through a 52nd-minute goal. On the domestic front, the final of the Nigerian National League Super 8, saw Niger Tornadoes of Minna crowned champions at the Nnamdi Azikiwe Stadium, Enugu, on Sunday. The Minna-based side beat 3SC Shooting Stars Sports Club of Ibadan, 3-2, to emerge champions in Enugu. Shamsudeen Asheun scored the first goal of the game for Tornadoes in the 9th minute, but a 16th-minute penalty strike from Gafar Olafimihan levelled the scoreline as both sides went into the break on equal terms. Tornadoes proved to be the stronger of both sides as Ahmedy Liwan and Augustine scored in the 57th and 64th minutes to gift them a two-goal lead in the game. Sign up to the Connect Nigeria daily newsletter Despite Raheem Quadry’s strike for 3SC which reduced the goal deficit to one, the Ibadan-based club failed to get an equalizer as Niger Tornadoes returned to the NPFL in grand style. The Super 8 saw Niger Tornadoes, 3SC, Gombe United, and Remo Stars return to the NPFL. At the ongoing African Championships in Kigali, Rwanda, the Nigerian national men’s volleyball team made history after qualifying for the quarterfinal of the competition for the first time in 16 years with a 3-1 (25-20, 25-12, 32-34, 25-17) win over Ethiopia in their last group game. The women’s volleyball team also started their campaign in the tournament on a good note after beating Senegal 3-0 (25-16, 25-18, 25-22). Sources: Complete Sports PM News Guardian NG Instagram @makingofchamps Featured Image Source: Punch Newspapers Got a suggestion? Contact us: editor@connectnigeria.com

This article was first published on 13th September 2021

Nigeria occupies the 8th spot on the medals table. Nigeria’s medal haul in the ongoing 2022 Commonwealth Games in Birmingham, United Kingdom, increased to 13 on Thursday, August 4, 2022, after Team Nigeria added four medals. Three out of the four medals were won in Para Powerlifting while one medal came from Women’s Discus Throw. … END_OF_DOCUMENT_TOKEN_TO_BE_REPLACED

The Spanish-based stars were outstanding in Nigeria’s campaign at the continental showpiece. Read more about Sports Nigerian national women’s football team stars, Rasheedat Ajibade and Osinachi Ohale, have been named in the 2022 Women’s Africa Cup of Nations (WAFCON) Best XI. The duo was instrumental to Nigeria’s campaign at the tournament which saw them qualify … END_OF_DOCUMENT_TOKEN_TO_BE_REPLACED

In the space of one week, four Nigerian women have achieved feats that brought some form of respite to the nation in the midst of a tension-ridden political climate. Read more about Sports Asisat Oshoala set the ball rolling on the 21st of June, 2021 when she won the African Player of the year; her … END_OF_DOCUMENT_TOKEN_TO_BE_REPLACED