Top Trends Of The Week 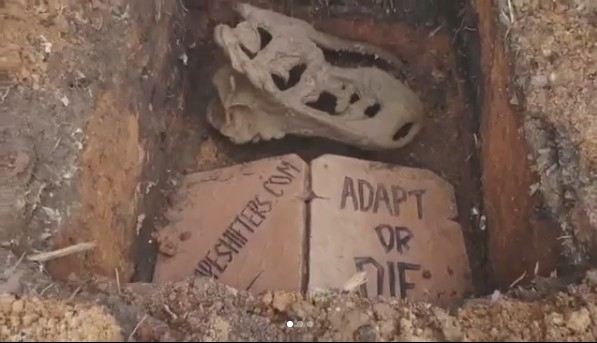 21
SHARES
ShareTweetWhatsappSave
Mail
The ShapeShifter Saga: A few days ago, reports of a supposed dinosaur’s bones surfaced online. The bones were said to have been found by construction workers at Mowe, Lagos. At this point, conversations had already begun about the authenticity of the report and how a country like Nigeria will react to this new discovery. The story got even more interesting when a video emerged of the supposed landowner of the site where the bones were found, demanding to be settled before the bones could be taken away. Presently, another video has been released showing a tablet lying beside the bones. The tablets show the inscribed words “ADAPT OR DIE”, alongside a website address, ‘x3mshapeshifters.com’. A lot of online users have now speculated that it could be a prank or a marketing strategy employed by an organization. In fact, a group of people have also taken pictures with the bone-like structure and they’ve posted a video identifying themselves as a brand; they seem to be an advertising brand and they are currently trending on Twitter. What do you think about this marketing strategy?

#swipleft Dinosaurs discovered in Nigeria It is not an ancient giant deity oo, my people! The fossil is for dinosaur! Yesterday, Dinosaur remains were reported to have been found by a construction worker in Mowe. . But the land owner, Oga Sunday wants officials to “settle” him before he can let them take the bones off his land.

We implore you to be a dragon, do not wiped out like a dinosaur…Shape Shift or Die#ShapeShifters pic.twitter.com/FMRknSgRu3

“We live in a changing world, unless we shift and adapt with current trends, thriving will be impossible “Steve Babaeko Chief Creative Officer X3M IDEAS#ShapeShifters pic.twitter.com/Hoxm7wzCxo

Nwa Baby: Hottest Song On The Block Davido has just announced the release of his much-talked-about, latest anthem, New Baby. The song which is also accompanied by colourful visuals was jointly produced by Fresh VDM and Speroach, and released in the early hours of Friday, August 10,2018. Like ,Assurance, the song depicts the love life of the pop star and has lyrics denoting promises of unfailing love and commitment. Davido has also been reported to have taken delivery of his private jet. He made the revelation in Twitter and Instagram that the aircraft has landed in Nigeria.

O.B.O announces the arrival of his Private Jet via his Instagram ??? ✈️ ✈️

SingTheSongNigeria: For all those who know the lyrics to their favorite songs by heart, a game has been created for you to show your “lyric expertise” and win a price of 5million Naira for yourself. Head over to this link (https://t.co/GmvofLAMOo) below to register for it. Here are some online conversations about it:

You think you know the lyrics to your favorite hit songs? Register for free and try out for a chance to win the grand sum of 5 million naira! Head to https://t.co/oT3oculn3L real quick to audition for #SingTheSongNigeria

Want to win five million naira? It is quite easy, all you have to do is register for the #SingTheSongNigeria auditions, holding on the 17th to 19th of August 2018. Click on the link below to register for free

I am doing rehearsal For #SingTheSongNigeria inside the room ⛔⛔⛔⛔ pic.twitter.com/JQN3qMj6dL

This article was first published on 15th August 2018

Without good content, your business will be shaky. Whichever way you look at it, content is what drives any business. From your social media pages to your website and product packaging, content is everything! Sometimes, we see ourselves keep getting it wrong when it comes to creating quality content that can ensure brand awareness and … END_OF_DOCUMENT_TOKEN_TO_BE_REPLACED

Social media has become a force in the marketing space. To a great length, it helps drive traffic to a business website and often helps increase revenue in the long haul. Massive sales are recorded to have been a result of social media marketing. This goes a long way to say that social media is … END_OF_DOCUMENT_TOKEN_TO_BE_REPLACED

Much more than ever, social media has become a useful tool for individuals and businesses to showcase themselves to the world. There is little you can do with physical branding, and with the post-pandemic era where more activities are carried out online, social media branding is the in thing. To be able to brand … END_OF_DOCUMENT_TOKEN_TO_BE_REPLACED

According to an article by Respond, “WhatsApp is important for businesses as there are now 2 billion users on the platform. 65 billion messages are sent per day and 80% of messages are seen within 5 minutes.“ Read more about Business Compared to traditional methods of reaching your customers like emails, 80% of messages sent … END_OF_DOCUMENT_TOKEN_TO_BE_REPLACED