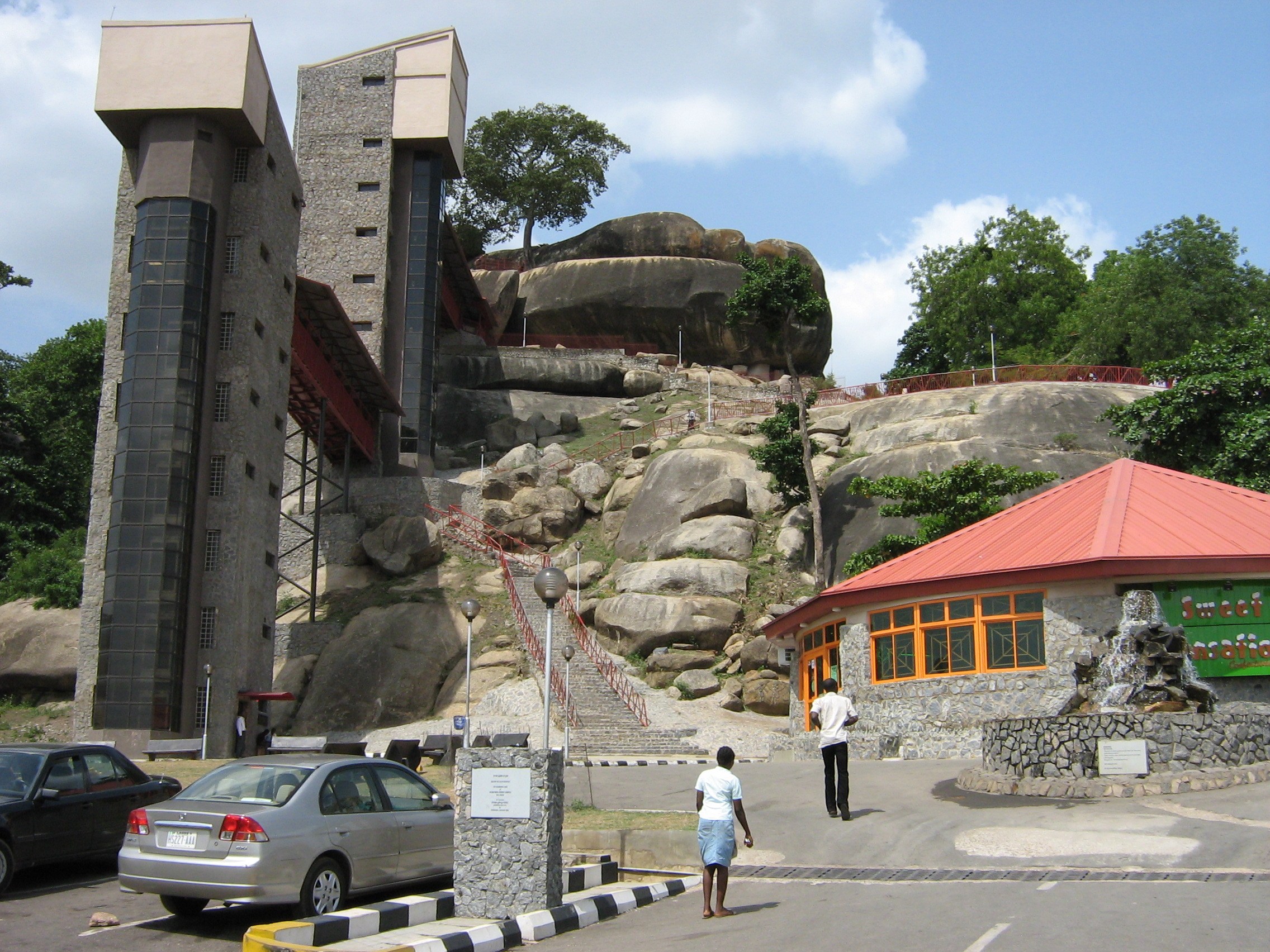 31
SHARES
ShareTweetWhatsappSave
Mail
The states that make up the south-west in Nigeria include Lagos State, Oyo State, Ekiti State, Ondo State, Osun State and Ogun State. South-Western Nigeria is filled with lots of attractions for tourists to see. From hills, holiday resorts, National parks, conservation centres, golf courses and beaches, to the only suspended lake in Africa and even an approved UNESCO Heritage Site. Here are just some places you should visit if you find yourself in the West.

Old Oyo National Park – The Old Oyo National park is home to two forest reserves, the great Agbaku Cave, Kosomonu hill, the old Akesan Market, a museum and a wide variety of wildlife. It also encompasses the ruins of the Old Oyo Ile Empire (before the Fulani invasion in 1837) and crucibles of Pottery used in the Alaafin’s Palace centuries ago. The animals tourists can see here are Python, Elephants, Buffalo, Roan Antelope, Baboons, Nile Crocodile, Spotted Hyena, Grey Hornbill, Senegal Fire-Finch, African fish eagle, etc. The park also has rare plant species. Agodi Park and Gardens –  Located close to the Government Secretariat right in the centre of Ibadan city, Agodi Gardens has over 13 acres of land. The Agodi Garden has a water park, a mini zoo or animal park, a botanical garden and forestry.  There five other parks/gardens in Ibadan but Agodi Gardens is the most popular. It is a great location to visit when on vacation during cultural events or festive seasons.

Ikogosi Warm spring – This is the most popular attraction in Ekiti State because having both hot and cold water flowing side by side and meeting at a confluence is a natural phenomenon. There is a resort there with accommodation, a warm swimming pool, herbal farm, restaurants and other facilities for those who want to sleep over. Another reason to visit this location is that just 6km from Ikogosi is another sight to behold, the 7 cascades of the Erinta Cold spring. This region is great for Eco-tourism as nature is relatively untouched through the years. Oroke Ewo War Centre – Ekiti State is full of attractions like the Fajuyi Memorial Park amongst others. But one site you must make time out for is the Oroke Ewo War Centre.  It was the battleground for an ancient war among the Yorubas in the 18th century and the outcome of that war is believed to be this field of Odidi Mode stone figurines. The Centre has been well preserved.

Oluminrin Waterfall – This waterfall in Erin Ijesha, is an ideal spot for picnics and sightseeing. It has seven steps that create multiple cascades over a precipice and most tourists can only go two levels up the waterfall. As you ascend, the atmosphere becomes cooler and tourists can clearly see the trail of the water coursing through the rocks to the fall. There are artworks along the way for weary hikers to feast their eyes on. Ooni of Ife’s Palace – If you want to get the origin story of a place, visit their traditional ruler’s palace. The palace is filled with significant cultural and historical relics made with local materials while still preserving the cultural details of the palace building.  The renovated palace has become an architectural artwork. Another cool reason to visit the palace is right next to the palace is the Art Gallery/Ife Museum with archaeological artefacts and bronze works dating as far back as the 13th Century.

Idanre Hills – The tale of Onodo’s tourist attractions is never complete without the mention of ‘Oke Idanre’ Hills. This location is more than a pretty vantage point in the landscape of Nigeria because of its many attractions. Such as: the 660 steps and five resting points (set at least 100 metres apart) leading up the hills;  Agboogun’s Footprint which fits any foot size except people considered as witches or wizards; the Thunder Water (Omi Aopara); a mystical dilapidated building; a burial mound; the Orosun Hill from which the Arun river reputed to have healing power flows from, etc. Owo Museum – Growing up most Nigerian children are taught about Owo art. Well, this museum is one place where you can learn more about the history and culture of the Owo people and their works. It houses the ‘Ojo-Ebu’ ancestral shrine and antiquities of ivory carvings, brass and bronze works formerly stored at the Palace of the Olowo Monarch.

Olumo Rock – Found in Abeokuta, the capital of Ogun state, this historical monument is a massive outcrop of granite rock. It has lots of large caves and historical artefacts, benches at rest posts and man-made stairs and an elevator to help tourists get to the top of the rock. Within the Olumo rock complex, you have restaurants, a museum and water fountain. Close to the complex is the Itoku Market, a textile market where dyes and Adire fabrics are sold. You can even get an informal tour of the traders’ tie-and-dye process if you ask nicely. Bilikisu Sungbo Shrine – According to archaeologists, this shrine is one of the oldest man-made Monuments built in West Africa. It is also a few miles from Olumo rock. It has a moss-covered Moat, a botanical and zoological garden, a tomb in honour of Oloye Bilikisu Sungbo who is believed to have ordered that the place be built and potteries and relics from the excavated ground.

The New Afrika Shrine – If attending live concert is your thing, this is one spot in Ikeja you mustn’t miss. It showcases musicals performances from Seun and Femi Kuti (on Thursdays, Sundays and Saturdays) when they are not on a tour, a photo gallery of Fela Ransome Kuti and an annual Felabration musical festival. But if you want to watch the theatrical stage play of Fela & The Kalakuta queen, you may have to go to Terra Kulture Arena in Victoria Island. Lekki Conservation Centre – There are so many attractions in Lagos state that picking two over the others just seems unfair. But we can’t ignore the appeal of this conservation centre. For one, it has the longest canopy walkway in Africa. Other attractions include the swamp, koi fish ponds, wildlife, a library, etc. It is a picnic haven, especially for families.

One thought on “Top 12 Tourist Destinations In South-Western Nigeria”

Over the years, traveling has become a means of learning and exploring one’s knowledge. However, asides from self development, traveling is one of the most rewarding and empowering activities a person can embark on. Read more about Personal development Embarking on a road trip is another unique travel experience that helps you create a myriad … END_OF_DOCUMENT_TOKEN_TO_BE_REPLACED

We are in an election year, preparing for 2023 polls that will define the fate of the nation. Many people are hurrying to secure visas and passports, with plans to travel internationally, should things go sideways next year. Read more about Did you know? While they will tell you their travel plans are totally unrelated … END_OF_DOCUMENT_TOKEN_TO_BE_REPLACED

If you haven’t started planning for your end-of-the-year vacations before now, you need to start. Now is the best next time to plan. Read more about Tourism We have some upcoming tour deals you need to take action on before the year ends. Happy Orange Join the Kayak Hangout taking place in Lekki on the … END_OF_DOCUMENT_TOKEN_TO_BE_REPLACED