Throw Back Thursday: The Accord in Aburi That Didn’t Stand 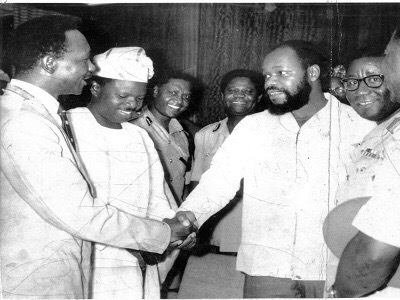 42
SHARES
ShareTweetWhatsappSave
Mail
Between 4th & 5th January 1967, a few months before the Nigerian civil war began in July 1967, a few military officers from Nigeria dragged one another to a location in Ghana, named Aburi. They left the meeting with a consensus agreement historically known as the Aburi Accord. It is, however, well known today that the much-touted meeting did not achieve its results.

The reason of this impromptu meeting was no other than to negotiate a binding agreement to resolve hostilities between the Nigerian government led by Lt. Colonel General Yakubu Gowon and the Governor of the Eastern region, Lt. – Colonel Odumegwu Ojukwu – and the people they led at large. The then Chairman of the Ghana National Liberation Council, Lt. General J.A. Ankrah chaired the meeting which 12 other delegates from Nigeria attended. Events preceding the call for this accord had been majorly the maltreatment of the Igbo people who were being massacred in northern parts of Nigeria. Ojukwu, though an Oxford-educated soldier with an aristocratic background himself, could not bear seeing his kin being killed without the federal government taking proactive measures about it. Recruitment into the army was skewed largely in favour of the North and decrees were also enacted which set the tone for chaos. The Western Region was not much agitated by most of these developments because they were not directly affected. All genocides have remote causes, they say. These massacres which the East complained about did not just happen overnight too; the north believed the January 1966 coup was mainly targeted at northern politicians. The tone for hostilities was already set. Trust was so whittled down to its lowest that Ojukwu demanded that the meeting be held on neutral grounds. He did not trust the Western Region enough, let alone agree that the Northern Region host. Gowon did not trust the Eastern Region to hold the meeting too; hence the choice of Aburi in Accra, Ghana.

The agenda of the meeting comprised the re-organisation of the army, constitutional amendments, and the issue of displaced persons. The accord was pragmatic enough to address them all as resolutions. Even a major element of the accord pushed for by Ojukwu concerning the repeal of decrees enacted since the January 1966 coup was immediately granted on Gowon’s arrival in Lagos. If at all these actors in the Nigerian political game came out of the meeting unscathed, their interpretation of it was what broke down the accord. It can be argued in retrospect that 2 days was too short a time to finesse a holistic plan for lasting peace in the country. It was said that Ojukwu went into the meeting with an air of arrogance. He perhaps had reason to because he also believed he is not beholden to the rulership of Gowon after the coup of ‘trickery’ which ousted and killed General Aguiyi Ironsi, the military head of state, in the July 1966 counter-coup. Gowon himself, believed he was the rightful reformer who would straighten things and right the wrongs done to his kin after the failed January 1966 coup. So in readiness to assuage Gowon and the Western Region, he readily acceded to too many of Ojukwu’s demands at the meeting. Gowon himself would later realize some of the sections in the accord were not realistic enough if he were still to remain Supreme Military leader. All ground was set for the faux accord to break down even before it took effect. When it was became evident to all parties concerned that the accord was futile, effort continued by the Federal government to ready for war and the Eastern Region too issued order to the Igbo nation to find their way back home, while stockpiling more weapons for the pogrom which ensued. Ojukwu eventually declared Biafra a sovereign state on 30th May, 1967. Of course, the federal government would not have a secessionist state under its watch. The war officially began on 6th July 1967 when Gowon declared war on Biafra; 182 days after a peaceful Accord in Aburi which never succeeded.

This article was first published on 30th August 2018

2 thoughts on “Throw Back Thursday: The Accord in Aburi That Didn’t Stand”

A Permanent Voters Card is something that every Nigerian desires to have right now. The General Elections in 2023 are less than a year away. Read more about Politics Here’s something you should know: the Continuous Voter Registration activity was launched by the Independent National Electoral Commission (INEC) in June 2021. This registration exercise is … END_OF_DOCUMENT_TOKEN_TO_BE_REPLACED

Following the resignation of Boris Johnson as Prime Minister of the UK on 7 July 2022, 46-year-old Nigerian-born woman, Kemi Badenoch among seven otherrs has been tipped to succeed Boris as Prime Minister. Similarly, other nominees who received at least 20 nominations to become the UK Prime Minister include Suella Braverman, Jeremy Hunt, … END_OF_DOCUMENT_TOKEN_TO_BE_REPLACED

Peter Obi believes Baba-Ahmed is reputable for the position of a vice president if he wins in 2023. Read more about News After weeks of deliberation and consultations, Nigeria’s Labour Party on Friday, July 8, 2022, unveiled Senator Yusuf Datti Baba-Ahmed as the running mate of Peter Obi in the 2023 presidential election. The unveiling … END_OF_DOCUMENT_TOKEN_TO_BE_REPLACED