The Need for Mobilization Against Corruption in Nigeria 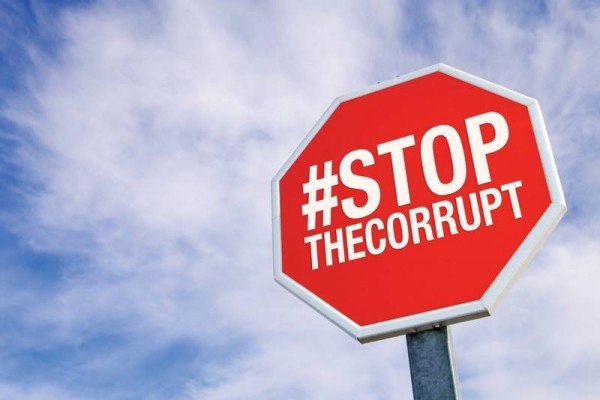 34
SHARES
ShareTweetWhatsappSave
Mail
Corruption has gained tremendous weight in our journey of countryhood. Peter Eigen, the Chairman of Transparency International (cited in a 2005 Global Corruption report) argued that corruption does not just line the pockets of the political and business elites, it leaves ordinary people without essential services such as life savings and medicinal drugs, and deprives them of access to sanitation and housing. In short, corruption costs lives. This statement is truly reflective of the situation in Nigeria. Each time we drive through a pothole on a tarred road, each time we turn on the tap and water refuses to come out, each time electricity fails to come on in spite of the fact that we paid our bills, each time an aircraft crashes because of factors that are avoidable and so on, we see the ugly face of corruption at play. Corruption in its entire ramification appears to have permeated and pervaded all aspects of our value system to the point that one may argue that it has become part of the prevailing social order in Nigeria. Corruption is defined by the Oxford Advanced Learners’ Dictionary as “illegal behaviour”. This interesting definition leaves us with the fact that corruption is not restricted to accepting and receiving bribes; it entails immoral behaviour, social decadence and human degeneration. Corrupt activities can significantly harm the social, political and economic life of any society. They are damaging if only for the simple reason that they distort choice. In the public realm, decisions that should normally be taken for the social good, with due regards to the norm of public sector’s efficiency and good governance, are instead based on considerations of private gains, with little attention paid to the effects on the larger community. Corrupted decision making distorts the public expenditure process, diverts funds from more efficient uses and reduces the resources available for legitimate and more productive public use. Even though it is admitted that at some point in our colonial history the seed of corruption found its way to our shore and thus, Nigeria at independence inherited a weak socio-political structure and a deflective and unbalanced federation, the intensification of ethnic consciousness and rivalries, a subverted indigenous ethos of government and culture and above all, inexperienced leadership, I am of the view that we entrenched the monster called Corruption and today, it gives us the run of our lives. The ramification and extent of political corruption in Nigeria are so vast that proper conceptualization becomes an issue. What exactly is the nature of the phenomenon of Nigeria and what peculiarities mark out the Nigerian genre of this global malady? Corruption in Nigeria seems to fit in the realm of Robinson’s (1998) categorization as a systemic or entrenched corruption that fits into societies with low political competition, low and uneven economic growth, a weak civil society and the absence or ineffectiveness of institutional mechanism to deal with corruption. It affects institutions and influences individual behaviour at all levels. Asides prevailing over all strata of our societies, political corruption, embracing bribes, kickbacks, side payments, fraud, capital flight, looting, settlements, over-invoicing and so on, have deposed democratic principles of probity and accountability as guidelines for official conduct. Thus, the embarrassment and economic ruin that corruption has caused Nigeria nationally and internationally are better imagined than described. The adverse effect of corruption on a society can be very significant if left unchecked. It can erode the rule of law, undermine the efficiency of governance, stifle economic development and in some cases, trigger social and political unrest. Corruption flourishes best in societies with weak civil society groups. Nigeria is one of those societies with penchant for condoning corruption and corrupt practices at all levels. The Nigerian governments in the past have made effort to fight corruption and nip the monster in the bud through the creation of the Independent and Corrupt Practices Commission (ICPC), The Economic and Financial Crimes Commission (EFCC) and others. But the Nigerian civil society groups have not at any time seriously mobilized itself as a conglomerate component against corruption. Yes, at some point we have had protests against fuel price increase, electoral malpractices, unreasonable government policies and anti-social legislation, but at no time have we had mobilization on economic and political corruption, if my memory serves me right. The Nigerian civil society group must wake up from this epileptic slumber to mobilize itself against the embers of corruption, which has long become a canker-worm that has eaten deeply into the fabric of our nation’s solidarity.    Photo credit: Cape 360High     About the Writer: Evans Ufeli is a lawyer and the author of acclaimed novel, ‘Without Face’. He is also an Alumni member of the Writers Bureau, Manchester, a highly sought-after conference speaker with a passion for the concept of change. He lives in Victoria Island, Lagos. You can contact him via Facebook: Evans Ufeli, Email: evanylaw@yahoo.com, Twitter: @Evansufeli and Phone: 08037712353.

Since Nigeria gained independence from the British in 1960, leading figures like Nnamdi Azikiwe, Obafemi Awolowo, and Ahmadu Bello amongst others have been celebrated as freedom fighters and dominated the Nigerian mainstream history. However, there are various unsung heroes of Nigeria’s independence – the youths. There have been opinions that the Nigerian youth were nowhere … END_OF_DOCUMENT_TOKEN_TO_BE_REPLACED

The journey of becoming a successful businessperson in Nigeria is way too different from other climes. Nigeria is a peculiar terrain and it requires peculiar strategies if you are going to stay afloat in the business world of Nigeria. The truth is, running a business in Nigeria is three times difficult compared to Europe … END_OF_DOCUMENT_TOKEN_TO_BE_REPLACED

Abdulrasheed Bawa was handpicked to be the next chairman of the EFCC in a rather eventful week in national politics. Many have raised eyebrows for a number of reasons. Prominent amongst them is his age; the man is only forty-as he is pretty young for a Nigerian….. anything for that matter. Read more about politics … END_OF_DOCUMENT_TOKEN_TO_BE_REPLACED

As Nigeria commemorates her diamond jubilee anniversary of its independence, this year’s celebration should be a little bit different from the previous ones. Instead of the commemoration being a cause for celebration, it should be a period for a re-evaluation of strategies for success beyond the pandemic. With the Nation experiencing the ‘heptilema (seven and … END_OF_DOCUMENT_TOKEN_TO_BE_REPLACED