Saraki vs. Tinubu: When Push Comes to Shove 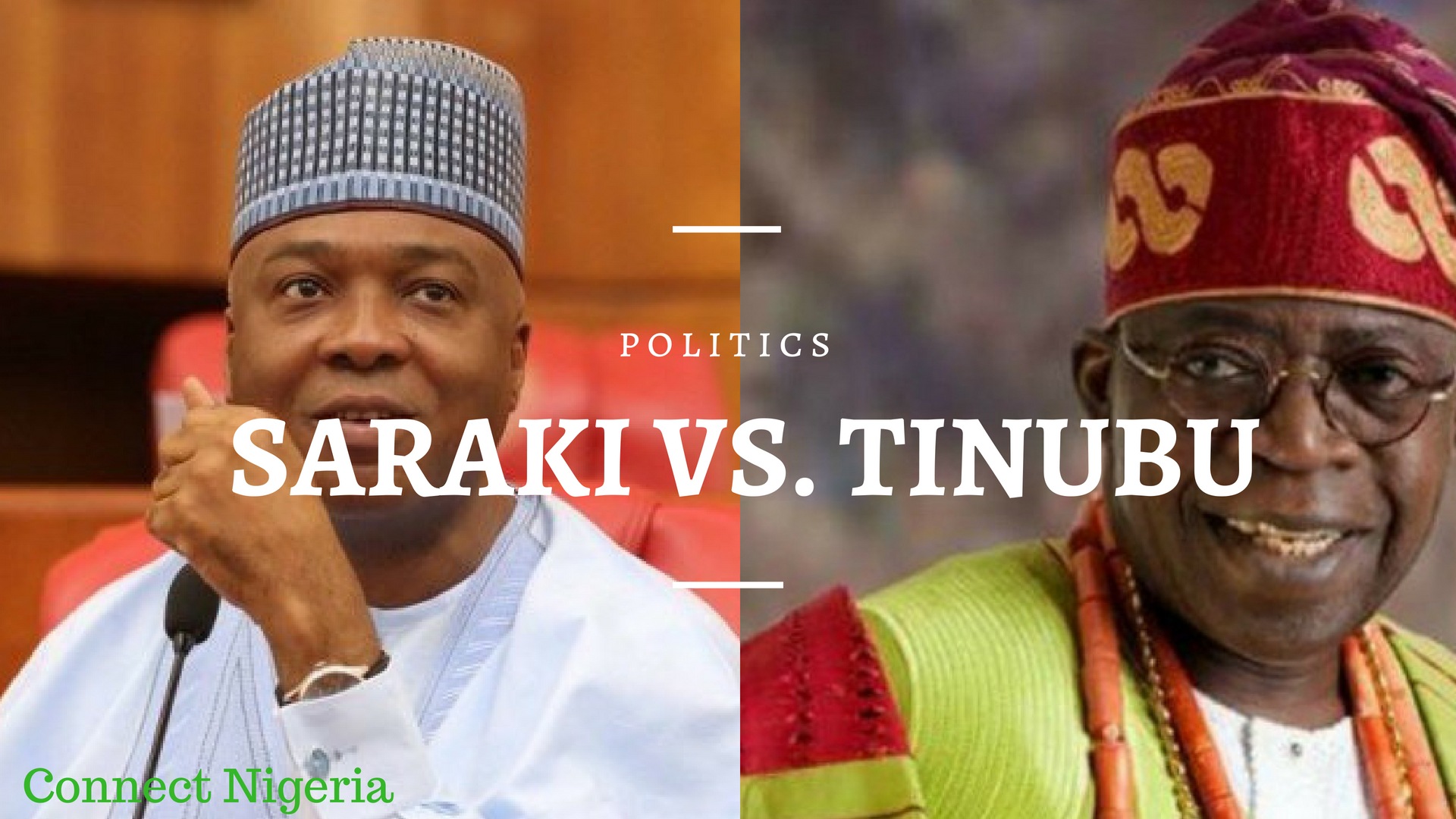 34
SHARES
ShareTweetWhatsappSave
Mail
You can hardly catch Asiwaju Bola Ahmed Tinubu engage in a public war of words. The former governor of Lagos state and senator in Nigeria’s 3rd Republic surrounds himself with so much myth. He has given himself such a public aura that his legend is hardly tainted. There is a technique to it – you fight dirty behind the curtains and keep mum publicly. But this principle of not fighting publicly recently changed when he took Bukola Saraki to the cleaners.

The man, the myth

Also, his followers either love everything he stands for to be quite ready to die for him or they do this out of extreme fear. This element is not a strange tactic employed by politicians in ‘befriending’ the mindset of their minions. Even before Bola Tinubu dares engage in a media war with another politician you would find that his loyalists have crucified such a fellow who attempts to disrespect their godfather. So when the Senate President, Dr. Bukola Saraki, ran a few shenanigans in the media recently, starting with the world press conference, it indirectly tried to tarnish the sainthood of Asiwaju Bola Tinubu, the National Leader of the All Progressives Congress. In his response at a function recently as well as in a caustic piece titled They Go Away Because We Go the Right Way, he attempted rather shoddily to cut Bukola Saraki’s wings to size. You may accuse Saraki of being overly ambitious. You will also realize that he is only fighting for political survival; fighting against the principalities and systematically tilting the equilibrium in his favour.

The method Tinubu thought might help nip Saraki in the bud has arguably emboldened him the more. Tinubu tongue-lashed Saraki in the diatribe, and Saraki renounced every note of rhetoric Tinubu sounded with a public rebuttal, not missing a beat. Perhaps he has suffered enough in the hands of his persecutors. Saraki did not stop at that, he proceeded to play a higher level of petty politics by ‘exposing’ the albeit muted political ambition of Tinubu come 2023. Saraki insinuated that Tinubu only stepped down from running as President Muhammadu Buhari’s vice president in 2015 because of a promise from Buhari that he will allow Tinubu run for the presidency in 2023. On the eve of 2019, this allegation is a game-changer in how regional politics play out. And this is not merely an allegation, the interest Tinubu had/has in contesting the presidency is well preserved in the books, On a Platter of Gold by Bolaji Abdullahi and Against the Run of Play by Olusegun Adeniyi. Even if such information is well known within political circles and titans, it is not one so detailed that the public is aware of. These changes alter the equation in the political landscape greatly – politics trickle down to the grassroots afterall.

Since the beginning of Saraki’s term as a controversially elected Senate President, he has been continually tailed by instruments of government which many believe are out to persecute him. These institutions and watchdogs, even political opponents, now hope that Saraki commits a gaffe which would render him persona-non-grata in the polity. So far, this has not happened. In terms of political might at the moment, Tinubu is arguably equal to Saraki if a little of Atiku is added to balance. But Saraki seems to be picking speed even at a pace Tinubu did not envisage. Was Tinubu silly to have allowed Saraki slip out of his hands in the APC? Was he tired of the silent power play going on behind the scenes? Did Tinubu think it is better to dispose of Saraki early into the 2019 race so that Saraki can decimate his own political goodwill with his own hands? Is the political game working in Tinubu’s favour so far? And as we may not have answers to so many of these questions yet, we know that Saraki is slowly getting to be the most appealing individual in the opposition (PDP). The more he is attacked the more political fuel being added to his ambition.

This article was first published on 24th August 2018

A Permanent Voters Card is something that every Nigerian desires to have right now. The General Elections in 2023 are less than a year away. Read more about Politics Here’s something you should know: the Continuous Voter Registration activity was launched by the Independent National Electoral Commission (INEC) in June 2021. This registration exercise is … END_OF_DOCUMENT_TOKEN_TO_BE_REPLACED

Following the resignation of Boris Johnson as Prime Minister of the UK on 7 July 2022, 46-year-old Nigerian-born woman, Kemi Badenoch among seven otherrs has been tipped to succeed Boris as Prime Minister. Similarly, other nominees who received at least 20 nominations to become the UK Prime Minister include Suella Braverman, Jeremy Hunt, … END_OF_DOCUMENT_TOKEN_TO_BE_REPLACED

Peter Obi believes Baba-Ahmed is reputable for the position of a vice president if he wins in 2023. Read more about News After weeks of deliberation and consultations, Nigeria’s Labour Party on Friday, July 8, 2022, unveiled Senator Yusuf Datti Baba-Ahmed as the running mate of Peter Obi in the 2023 presidential election. The unveiling … END_OF_DOCUMENT_TOKEN_TO_BE_REPLACED