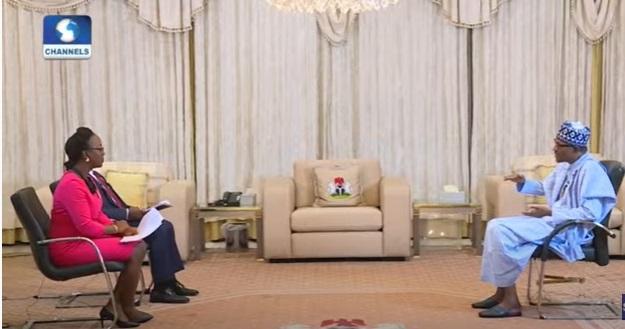 25
SHARES
ShareTweetWhatsappSave
Mail
President Buhari has ended his long restrictions to media interviews this week as he spoke to two major television stations. While the first interview was with the privately-owned Channels Television, the other was Africa’s largest television network, Nigeria Television Authority (NTA). Read more about Politics Since 2015, Buhari has largely stayed away from the monthly or quarterly media interviews like his predecessors. Granting two interviews in the space of two days came as a surprise to many as the Number One Citizen is known for his taciturn nature. The interview with these media stations lasted over 40 minutes, an additional ten to fifteen minutes compared to his previous short interviews. That of Channels TV was held on Wednesday and that NTA was done on Thursday. In both interviews, Mr Buhari was able to bring to bear a lot of pressing issues ranging from insecurity, agriculture, Biafran agitation and Nnamdi Kanu, herders-farmers clashes, agitation for the creation of state police, the Electoral Act Amendment Bill among others. Both interviews revolved around these issues. Regardless, tongues have been wagging over both interviews, and several quarters have reacted to the president’s speech. In the Channels TV interview conducted by Seun Okinbaloye and Maupe Ogun, the President, when asked about the economy and employment, differences between his tenure and that of his predecessor, in which he had a lower approval rating as Seun reeled out the statistics, the President reacted by stating that he had redeemed his campaign promises he made in 2015. Despite the seeming failure of his tenure, the President spoke on how much he had improved the economy, especially in the area of agriculture. To put in proper perspective, Seun reminded the President that before his tenure, Nigeria’s foreign debt stood at $7.35billion compared to the N33.1 trillion ($87.24 billion) foreign debt under his tenure. With glaring evidence of external debt, the President stated that he met a dilapidated state, run down by the previous People’s Democratic Party’s government. Opposed the viewpoints of many Nigerians that herdsmen should be compelled to raise their cattle in ranches or build cattle colonies to circumvent further farmer-herder clashes, Mr Buhari in the interview maintained that the restoration of grazing routes is the only remedy to the problem. This statement of Mr President has angered a larger section of the country who believes that he is not only ignorant about modern-day cattle rearing practices, but he is unmoved about the killings perpetrated by these killer herdsmen. Speaking on grazing route policy contained in the Grazing Reserve Law of 1965, herdsmen are legally authorised to transport livestock from one place to another. Also, in the interview, the President regurgitated his opposition to state police, saying it is not an option for curtailing the nation’s security crisis. According to him:

“State police is not an option. Find out the relationship between local governments and the governors. Are the third tier of government getting what they are supposed to get constitutionally,”

This statement is coming on the heels of banditry in the Northwest, terrorism in the Northeast, agitations and the formation of regional security outfits in the southern part of the country. Furthermore, the continuous call for state police by southwest governors have clashed with the opinions of the Presidency. Responding to Buhari’s insistence on state police as not an option for solving insecurity problems in Nigeria, Nigerians are divided over his stance. Some have agreed with the President on this, stating that state police could embolden dictatorship and abuse of power among governors. On the other hand, some believe that indigenous problems of insecurity can be best tackled with indigenous insecurity outfits. Sign up to the Connect Nigeria daily newsletter Speaking on Indigenous Peoples of Biafra (IPOB) and the arrest of Nnamdi Kanu, a Biafran freedom fighter, the President asserted that he is granting independence to the judicial process and that Nnamdi Kanu should face the law. The president who also spoke to NTA on Thursday, 6 January 2021, claimed that he had given his best to Nigeria and does not expect any appreciation from Nigerians. Speaking on the anti-corruption war, the President reasserted that those charged with corruption will be prosecuted whether they are within or outside his party, All Progressives Congress (APC). He further stated that those who are switching into his party as a means of escaping the radar of the law will not be spared. The President claimed that corruption is endemic in developing countries and will be a difficult war to win because many people want to live above their means. He urged people to live within their means. It is quite confusing to see the President who had promised to deal with corruption decisively feeling deflated in many ways. Many Nigerians have faulted the President’s one-sided fight against corruption as he has been reputed to use the Economic and Financial Crimes Commission (EFCC) as a tool of intimidating the opposition while many corrupt officials lie within the ranks of the APC. Furthermore, when the question of his denial to grant his assent to the Electoral Act Amendment Bill came up, the President responded that he wanted the people to be given freedom of choice. He insisted that direct, indirect and consensus channels must be presented before the electorates without any form of harassment or coercion by ‘influential’ people. According to President:

“People should be given a choice. There are three ways – direct, indirect and consensus. The important thing is to show Nigerians that wherever they are, we respect them, that they are the ones that decide what to do, who to vote for, that we do not allow anybody to raise an army of thugs and intimidate people… This is our objective, and we hope that it is respected, that we don’t allow anybody no matter how influential to intimidate. Those who want power must work for it.”

Speaking on the high rate of unemployment, the President urged Nigerians to go back to the farm and to see agriculture as the viable panacea to Nigeria’s unemployment problem. Several Nigerians have reacted to Buhari’s solution to unemployment as myopic and outdated. With the advent of science and technology and the emergence of the Fourth Industrial Revolution, solving unemployment through agriculture is only a fraction of the whole. On the other hand, many have applauded the President’s investment in agriculture. Among other things that were discussed, Mr President spoke on his ageing as a reason for his underperformance and has stated his anticipation to retire peacefully as he is 17-month shy away from becoming an ex-president. In conclusion, it came as a surprise to many Nigerians that President Buhari after a long hiatus chose to speak to Nigerians. However, the interviews were received with mixed feelings and were generally scored low by Nigerians. Featured Image Source: Vanguard News Got a suggestion? Contact us: editor@connectnigeria.com

This article was first published on 7th January 2022

A Permanent Voters Card is something that every Nigerian desires to have right now. The General Elections in 2023 are less than a year away. Read more about Politics Here’s something you should know: the Continuous Voter Registration activity was launched by the Independent National Electoral Commission (INEC) in June 2021. This registration exercise is … END_OF_DOCUMENT_TOKEN_TO_BE_REPLACED

Following the resignation of Boris Johnson as Prime Minister of the UK on 7 July 2022, 46-year-old Nigerian-born woman, Kemi Badenoch among seven otherrs has been tipped to succeed Boris as Prime Minister. Similarly, other nominees who received at least 20 nominations to become the UK Prime Minister include Suella Braverman, Jeremy Hunt, … END_OF_DOCUMENT_TOKEN_TO_BE_REPLACED

Peter Obi believes Baba-Ahmed is reputable for the position of a vice president if he wins in 2023. Read more about News After weeks of deliberation and consultations, Nigeria’s Labour Party on Friday, July 8, 2022, unveiled Senator Yusuf Datti Baba-Ahmed as the running mate of Peter Obi in the 2023 presidential election. The unveiling … END_OF_DOCUMENT_TOKEN_TO_BE_REPLACED