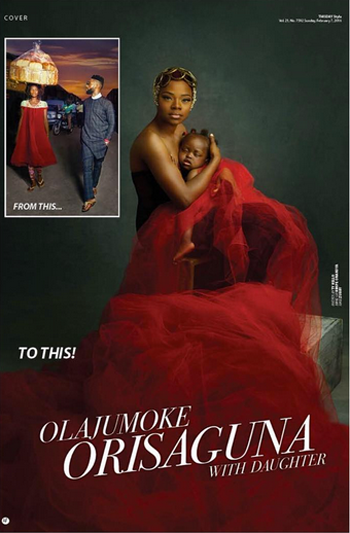 Grass to grace stories are hard to come by, but Olajumoke Orisaguna comes to us by chance.

Trending this week has been the talk of Olajumoke, the bread seller who walked in by chance when Ty Bello was photo shooting the pop star Tinie Tempah for THISDAY Style. Tempah, the Nigerian-British rapper, singer and record producer, was on a visit to Nigeria, where he took part in shots with TY Bello, the artist popularly known for her song The Land Is Green and her photographs for THISDAY Style.

The incident was purely unintentional, with Ty Bello not giving it a thought at first. Not until she went back to going through the shots, and not until people began to ask if the bread seller was a model on release of THISDAY Style magazine on the 31st of January that featured her with Tinie Tempah. Bello took back to the streets putting out word in search of the woman who hawked bread, and offering to “help her build a portfolio if she was interested”. Certainly she was interested! The next day, Jumoke showed up at Ty Bello’s studio and that became the defining moment for her.

Jumoke featured on THISDAY Style, on Sunday, February 7 with the caption Olajumoke Orisaguna, THE MAKEOVER OF A STREET-SELLER… A COMPELLING STORY BY TY BELLO.

Prior to this incident, 27 year old Jumoke moved from Osun, where she had worked as a hairdresser, to Lagos. Leaving her husband and 5 year old daughter behind, she relocated with 14 month old Grace on invitation by a relative who introduced her to someone working at the Sabo Market bakery in a bid to make ends meet for her family. But Jumoke wakes up that morning like every other person, like every other street seller, to hustle. Tempah was the focal point, perhaps the okada rider was the side attraction according to Ty Bello, but Jumoke was the would-be model. After speaking with her husband, Ty Bello and her team set to work, with the leading makeup artist, Bimpe Onakoya and hairstylist Zubby.

Currently, Jumoke has over ten thousand likes on Instagram only and with thousands of posts and hashtags (#celebratingOlajumoke and #Olajumokebreadseller) on Twitter and Facebook. Her posts have also gone viral on international news handles like Huffington post. Ema Edosio, professional Nigerian videographer also made a short documentary about the process. Soon, she will be working as an intern at Make Me Salon and Sari Signature Salon in Victoria Island, Lagos. She has a list of modelling contracts with the modelling company, Few Models and the online retailer, Payporte. In addition, her education and accommodation is also being taken care of.

More news is still coming up on Olajumoke, as word continues to spread via online media.