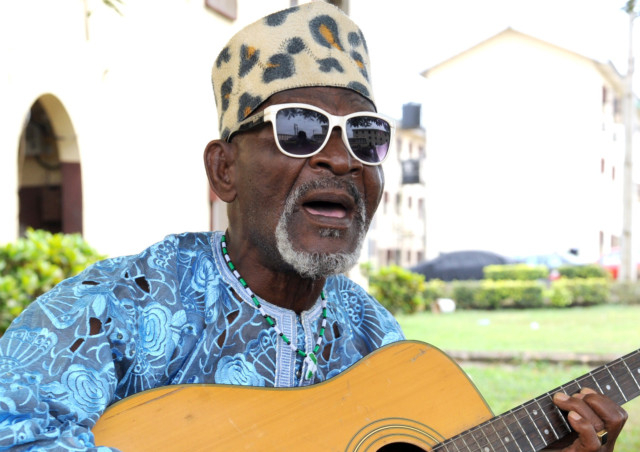 Brief Sketch of a ‘Rolling Dollar’

Prince Olayiwola Fatai Olagunju, known better as Fatai Rolling Dollar was born on the 22nd of July 1927. He was a Nigerian musician, described by the BBC as a “nationally celebrated performer“. He started his musical career in 1953 and he mentored a number of musicians including Ebenezer Obey and the late Orlando Owoh. He was known for his dexterity at playing the guitar; Rolling Dollar’s last major hit was “Won Kere Si Number Wa”. In 1957, he formed an eight-piece band called Fatai Rolling Dollar and his African Rhythm Band, and they recorded numerous seven-inch singles for Phillips West Africa Records.

Fatai Rolling Dollar was a Guitarist, Singer and Exponent of the Native Thumb Piano (Agidigbo) was the Veteran of West African Folk Music and one of the greatest influence on West African Contemporary music, who in is his long career directly spawned and mentored some of the most successful musicians in West Africa’s history such as Ebenezer Obey, King Sunny Ade, and Fela Kuti amongst others. His musical style is a fusion of Native Agidigbo with broader Highlife and Latin themes. The Latin influence is as a result of his birth/background in Lagos. In the mid-19th and early 20th centuries, Lagos was teeming with a large Brazilian and Hispanic immigrant population. He later experimented with Afro-Funk and Afro-beat.

Rolling Dollar, whose real surname is Olagunjo, have his schoolmates to thank for his stage name. They often called upon him to roll a two-and-a-half shilling piece (a dollar) to choose sides for the football matches at school break. He began his musical career during the years of hard graft put in for the marines of the colonial powers in his native port city. Fatai worked the Palm Line that went down to Congo, Libreville, Luanda, and Port Noire. Everywhere he went he picked up different rhythms on the Agidigbo and played it in exchange for Lucky Strike cigarettes.

His music break came in 1953 when he teamed up with master guitarist, J.O. Araba and tenor saxist, Ishola Willie Payne, to play at the exclusive Island Club. Their Afro Skittle band adopted Ghanaian palm wine music to Yoruba highlife sounds, a fusion that deeply influenced up-and-coming artists like Fela Kuti, Sunny Ade and Ebenezer Obey (whom he taught to play the guitar). In the early days of independence, the Afro Skittles recorded several 78-rpm vinyl songs for Philips, the most popular of which were “Ranka Dede” and “Ogba oya ya”.

He died on 12 June 2013, at the age of 86, and was praised by past Nigerian President Goodluck Jonathan. He died peacefully in his sleep. He was buried in Ikorodu, Lagos. At the time of his death, he was considered the oldest surviving music artist in Nigeria.

This article was first published on 28th October 2019

On Wednesday 6 July 2022, news broke that the Secretary-General of OPEC, Nigeria’s Mohammad Barkindo, had passed on. Read more about Business The announcement, which was made by the Group Managing Director of the NNPC, Mele Kyari, came just hours after Barkindo visited Nigeria. Barkindo had met with President Muhammadu Buhari and delivered the main … END_OF_DOCUMENT_TOKEN_TO_BE_REPLACED

The history of Nigeria’s independence struggle has featured popular names like Dr. Nnamdi Azikiwe, Chief Obafemi Awolowo, and Sir Ahmadu Bello. Other notable names include Sir Tafawa Balewa, Dr. Michael Okpara and S.L. Ankintola and a host of others. However, there are unsung heroes of the Nigeria independence movement, the Zikist Movement. The Zikist … END_OF_DOCUMENT_TOKEN_TO_BE_REPLACED

Oba Oyekan I reigned as the Lagos Monarch from March 1885 to September 30, 1900. He ascended the throne about a month after the death of his father, Oba Dosunmu. Read more about Nigerians in history Prince Oyekan vs. Chief Apena Ajasa incident In 1883, Oba Dosunmu, Oyekan’s father called a meeting to heal … END_OF_DOCUMENT_TOKEN_TO_BE_REPLACED