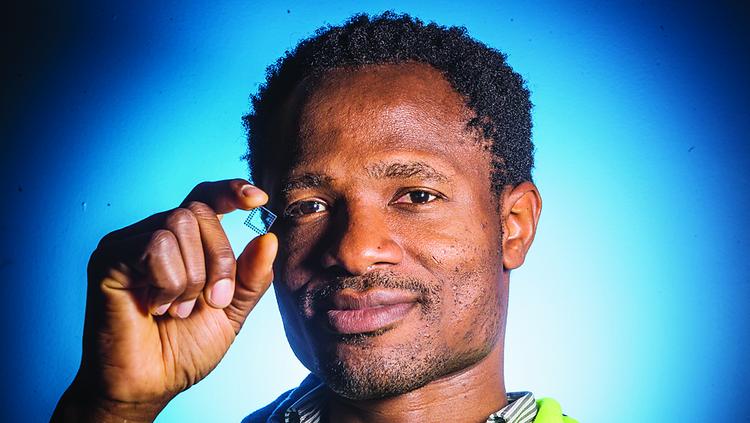 51
SHARES
ShareTweetWhatsappSave
Mail
Nigerians are super intelligent. With the negative news that flood our ears about the atrocities committed by Nigerians, it is alright to applaud our very own that are accomplished in their chosen sectors. One of such is Oshiorenya Agabi. He has risen high in a field that many are not into and has a large room to quantify his success. He is a Lagos born entrepreneur who is extending the boundaries of miracles and impossibilities. He runs Koniku, a start-up company that operates at the intersection of biotechnology and electronics as the world’s first Neuro-computation Company. Oshiorenya Agabi has done something that would make traveling fun again by removing the stringent security checks that we have in our airports. This, he has accomplished by making a device that can silently sniff out explosives and small bombs. The world first neuro technology device merges electronic circuitry with lab-grown neurons using biological cells. Rather than mimicking the brain which chips, he concentrates on borrowing material of human brains to create chips.  This he has done by integrating neurons cultured and grown in the lab into computer chips to make much more powerful than the standard silicon forebears. For those who still think that this is a fantasy reality world being written, as they believe human tissue is biodegradable, there is something called Artificial Intelligence. Agabi has created a device that can succeed in doing what many silicon devices have failed to solve. Such as detecting volatile smells, explosives and even cancer just by breathing in and smelling the air. The device which is modem-sized-like has been dubbed with Koniku Kore, named after his company, would be perfect for replacing traditional airport security and be the brain for future robotics and artificial intelligence. He had his BSc in Lagos before he went abroad for his Master’s degree in Physics. He further went for his PhD Degree at Imperial College in London to study Computational Neuroscience and Bioengineering. This is not trying to be divine but to develop the cognitive system by eventually building a device that would be capable of thinking in the biological sense and not artificial. Feature Image Credit: thesheet.ng.

This article was first published on 30th August 2017

Following the resignation of Boris Johnson as Prime Minister of the UK on 7 July 2022, 46-year-old Nigerian-born woman, Kemi Badenoch among seven otherrs has been tipped to succeed Boris as Prime Minister. Similarly, other nominees who received at least 20 nominations to become the UK Prime Minister include Suella Braverman, Jeremy Hunt, … END_OF_DOCUMENT_TOKEN_TO_BE_REPLACED

The celebration is the biggest Islamic festival in Nigeria. Read more about News As part of celebrations marking the Eid-el-Kabir, the federal government has declared Monday, July 11 and Tuesday, July 12, 2022, as public holidays. This information was made public through a public statement from the Ministry of Interior and signed by the Permanent … END_OF_DOCUMENT_TOKEN_TO_BE_REPLACED

Tems has established a presence as one of the biggest Afrobeats stars in global music. She has collaborated with international acts such as Drake and Justin Bieber. Read more about News Superstar singer TemiladeOpeniyi, popularly known as Tems made history on Sunday, June 26, 2022, at the Microsoft Theatre, Los Angeles, USA after emerging the … END_OF_DOCUMENT_TOKEN_TO_BE_REPLACED

Nigerians have trooped to registration centres to partake in the exercise as they look towards deciding their future in 2023. Read more about Politics As Nigerians continue to partake in the Continuous Voter Registration (CVR) exercise, the Independent National Electoral Commission (INEC) has revealed that fresh registration hit 10,487,972 by 7:00 am on Monday, June … END_OF_DOCUMENT_TOKEN_TO_BE_REPLACED