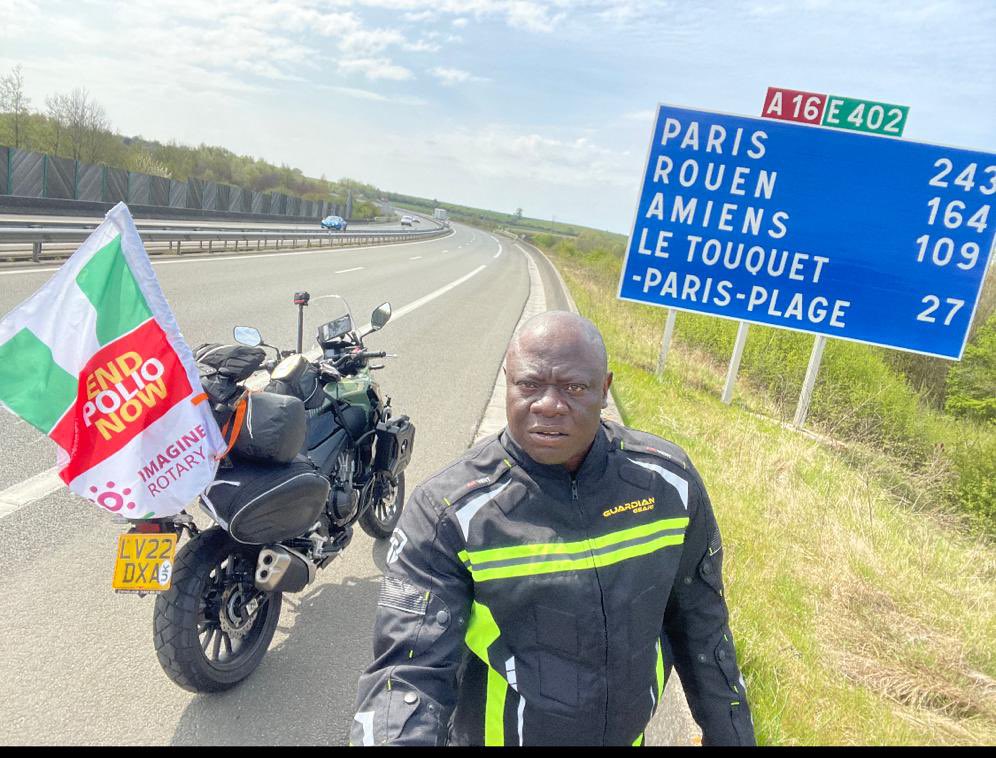 An ambitious biker, Kunle Adeyanju, has hit the airwaves and has caused a stir on the internet as he embarked on a “charity ride” from London, the UK, to Lagos on the bike. It has been 14 days since he last set out. According to him, his ride was to create an awareness to end polio in Africa.

The journey which is meant for the charity is planned to last 25 days and cover 12,000km. On the 4th of May, Kunle tweeted that he had arrived at St Louis, Senegal from Mauritania after crossing the Sahara Desert through Morocco.

He has kept his 41.4k Twitter followers entertained with new updates on his latest arrivals at various locations. A few days ago he arrived in the North African country of Morocco where he announced his encounter with a beautiful Moroccan lady. He recounted that the girl sent her younger sister to drop a phone number for him when he was inspecting his bike at a hotel. He later interacted with the girl in a Whatsapp video call and he described her as tall, slim, and beautiful.

He also sent out a video of the stunning moment he rode his bike crossing from Morocco to Mauritania in the severe Sahara Desert. He, however, described his time in Mauritania as unpleasant. He described the country as “the worst country in the world”.

He lamented the indiscriminate extortion that takes place at the border. At some point, he had to completely stop and use his left leg to bolster the movement of the bike as it was snagged in the pool of Sahara sand.

When he got to the Morocco-Mauritania border, he was stopped by the security agents who checked him thoroughly even with a sniffer dog. He lamented that the police collected the sum of N124,000. He stated that there was no beautiful sight to behold, that it was rather a wasteland.

Yesterday, being day 13 of the journey, Adeyanju arrived in Senegal and was hosted in Senegal by the Nigerian ambassador. He made this announcement via a tweet that he had arrived in St Louis, where he was treated to a Nigerian version of a pepper soup dish, which he described as peppery. Of course, it was delicious judging from his appreciation.

Several tweeps have reacted. One of the most eye-catching tweets was

“The company that designed your bike should not miss the opportunity of making you a brand ambassador. You’ve done more than anyone can with that bike.”

The association of bike riders in Lagos among others has promised to perform a grand reception for Kunle Adeyanju, the brave Nigerian biker who is riding from London, the United Kingdom to Lagos, Nigeria.