Nigeria Has Another Football Gem in Dele Alli 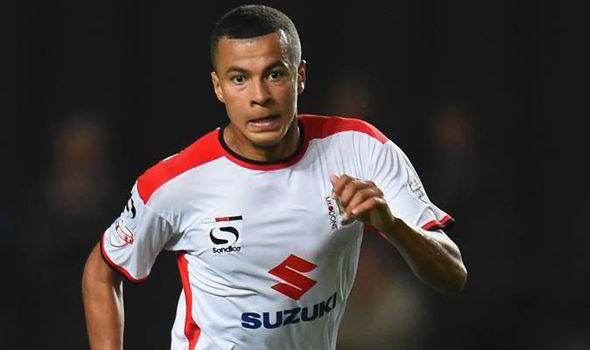 34
SHARES
ShareTweetWhatsappSave
Mail
Dele Alli, a midfielder, was born to Nigerian parents in Milton Keynes, United Kingdom on 11 April 1996. He joined the youth setup of the English League One club, Milton Keynes (MK) Dons at the age of eleven. He made his first team debut for the club at the age of sixteen on November 2 2012 against Cambridge United in an FA Cup tie. He scored his first goal for the club in the replay against the same team. He became a first-team regular for the club in the 2013/2014 season and became the first choice midfielder for the club following departure of Stephen Glesson to Birmingham City in the summer of 2014. Alli became a household name when he marshalled and controlled the midfield in 4-0 home trashing of Manchester United on 26th August 2014 in the League Cup. His performance earned him plaudits from every pundit in the game and led to comparison with Steven Gerrard. His rich vein of form has seen him score 12 goals for MK Dons in 28 appearances this season, which made several English Premier League clubs enquire about his availability. It was reported that numerous scouts from top clubs across Europe attended the Manchester United game to watch him play, including representatives from Bayern Munich and Liverpool. Alli finally signed for Tottenham Hotspur, beating off competition from Newcastle United and Aston Villa, on 2 February 2015 on a five-and-a-half-year deal for an initial fee of £5m but was loaned back to MK Dons for the remainder of the 2014–15 season. At International level, the 18-year-old has 15 caps at youth level for England but is yet to make a senior appearance and could still decide to switch allegiance to Nigeria. Former Wimbledon and England player, John Fashanu has vowed to persuade Alli to play for Nigeria. Fashanu had a similar decision to make during his own career and opted for line up for England in the 80s. According to SL10.ng, Fashanu said, “I will be speaking to some people at MK Dons to help patch me through to Alli. “We can’t afford to lose such a talented kid to England, it’s better we put up a fight than to let him go, I will do my best to persuade him to switch allegiance. “I sincerely believe in years to come he will be a top prospect and Nigeria, from what I will tell him, will be his best bet at being a global international star.” Fashanu faces an uphill task in convincing the much coveted youngster, who has been rumoured to be in line to earn his senior England cap this year, to play for Nigeria.   About the Writer: Arinze Ude (@arturozinga) is an aspiring cancer research scientist with a master’s degree in Biomedical Sciences (Haematology). He is keen on building partnerships and managing the careers of Nigerian sportsmen and women. He blogs at http://arturozinga.wordpress.com

This article was first published on 16th February 2015

One thought on “Nigeria Has Another Football Gem in Dele Alli”

Nigeria occupies the 8th spot on the medals table. Nigeria’s medal haul in the ongoing 2022 Commonwealth Games in Birmingham, United Kingdom, increased to 13 on Thursday, August 4, 2022, after Team Nigeria added four medals. Three out of the four medals were won in Para Powerlifting while one medal came from Women’s Discus Throw. … END_OF_DOCUMENT_TOKEN_TO_BE_REPLACED

The Spanish-based stars were outstanding in Nigeria’s campaign at the continental showpiece. Read more about Sports Nigerian national women’s football team stars, Rasheedat Ajibade and Osinachi Ohale, have been named in the 2022 Women’s Africa Cup of Nations (WAFCON) Best XI. The duo was instrumental to Nigeria’s campaign at the tournament which saw them qualify … END_OF_DOCUMENT_TOKEN_TO_BE_REPLACED

In the space of one week, four Nigerian women have achieved feats that brought some form of respite to the nation in the midst of a tension-ridden political climate. Read more about Sports Asisat Oshoala set the ball rolling on the 21st of June, 2021 when she won the African Player of the year; her … END_OF_DOCUMENT_TOKEN_TO_BE_REPLACED