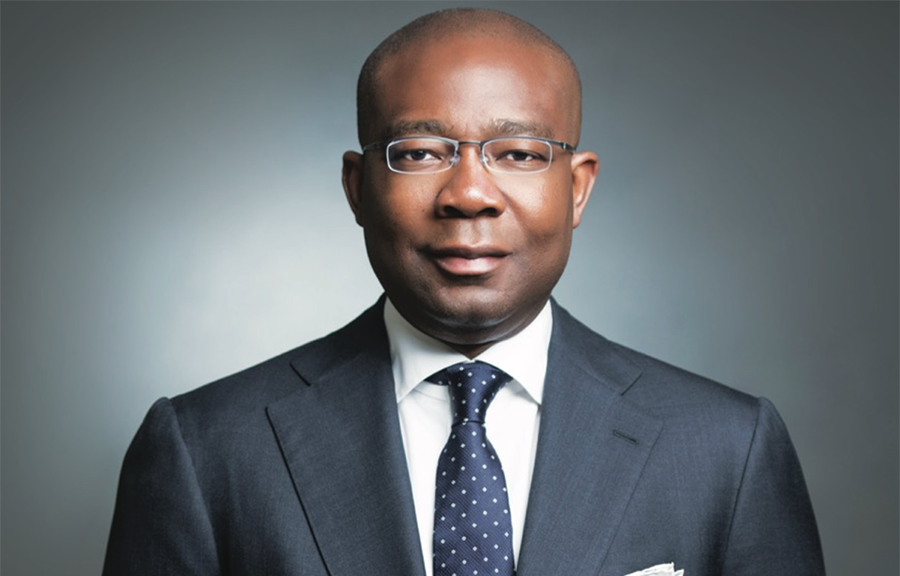 Aig-Imoukhuede was born on 24 September 1966 in Ibadan, Oyo State in Western Nigeria to parents who were in the civil service. His father, Frank Aig-Imoukhuede and mother, Historian Emily Aig-Imoukhuede(née Ihonde) had 3 other children, Erekpitan, Oluwakemi and Aigbovbioise. He hails from Sabongida-Ora, Edo State in Southern Nigeria. He lived with his family in Lagos but went to Federal Government College Kaduna, in Northern Nigeria. He earlier attended St. Saviours School (primary) in Lagos and at aged 16, he enrolled to study law at the University of Benin, Edo State, Nigeria. He graduated with an LLB degree in 1986 at age 19 and was called to the Nigerian Bar in 1987. He holds a Trium MBA, awarded jointly by the London School of Economics, New York University, and HEC Paris. In 2000 he attended a three-month Executive Management Programme course at Harvard Business School.

He began working as a lawyer with Continental Merchant Bank during his NYSC year in 1988. Aigboje joined Guaranty Trust Bank Plc in December 1991 where he resigned as executive director in March 2002. Aigboje Aig-Imoukhuede was the leader of the 2002 acquisition of Access Bank, then a fringe regional player. He was the group managing director and chief executive officer of the bank till December 2013.

He retired as president of the Nigerian Stock Exchange in 2017, but he remains on the National Council as an ex-officio. He was a non-executive director of Africa Finance Corporation from 2008 until June 2, 2017. He has been the chairman of Associated Discount House Limited since December 1, 2011. He serves as a director of Petralon Energy and retired as the chairman of Wapic Insurance Plc where he has been its director since November 2011.

Aig-Imoukhuede also served as board chairman and director of FMDQ OTC PLC until August 1, 2014. He founded Coronation Merchant Bank in 2015 and has led the growth and expansion of the Coronation Ecosystem. In October 2021, Aigboje collaborated with the office of the Head of Nigerian Civil Service (OHCSF), led by Folashade Yemi-Esan to digitalize work processes and public service delivery.

He was conferred with Commander of the Order of the Niger (CON) in 2011 by then President Goodluck Jonathan of the Federal Republic of Nigeria, for his contributions to the development of banking and finance. He was also awarded the National Productivity Order of Merit Award in 2009. In 2011 he was inaugurated into the Ernst and Young World Entrepreneurs Hall of Fame as the Ernst & Young West Africa Entrepreneur of the Year, as well as the African Banker Magazine’s “African Banker of the Year” in 2013.

He is a member of the American Academy of Arts and Sciences and was appointed a member of the international advisory board of Oxford University’s Blavatnik School of Government. He is a fellow of the African Leadership Institute affiliated with the Aspen Institute in Colorado, USA. He is also an honorary fellow of the Chartered Institute of Bankers of Nigeria. In 2018, he was awarded the honorary Doctor of Science (D.Sc.) by the Olabisi Onabanjo University, Ago-Iwoye, Ogun State, Nigeria.

He is the founder and chairman of the Africa Initiative for Governance, an independent non-profit that promotes good governance in Africa. AIG partners with Oxford University’s Blavatnik School of Government, for scholarships that send qualified Africans to Oxford for a Master of Public Policy degree and Fellowships for Senior Public Servants. The Africa Initiative for Governance (AIG) partnership will run for five years, from 2017/18 until 2021/22.

He is currently the chairman of ABCHealth, a regional non-profit established by the Aliko Dangote Foundation and GBCHealth. He is also a director of the Private Sector Health Alliance of Nigeria (PSHAN). In 2019, Aigboje initiated the Adopt-A-Healthcare-Facility Programme (ADHFP).

He is also the vice-chairman of Global Citizen Nigeria and through a partnership with the Nigeria Sovereign Investment Fund (NSIA), has created the Nigerian Solidarity Support Fund (NSSF).

Aigboje is the author of Leaving the Tarmac: Buying a Bank in Africa (Red Door, 2020). A memoir that recounts how he and Herbert Wigwe bought Access Bank in 2002, one of the smallest and most crisis-prone banks in Nigeria built it into one of the biggest and strongest banks in the country. Aigboje is also a past President of The Nigerian Stock Exchange (now Nigerian Exchange Group) where he took over from Aliko Dangote, the founding Chairman of the FMDQ OTC Exchange, Chairman of EnterpriseNGR and co-founder of Tengen Family Office.