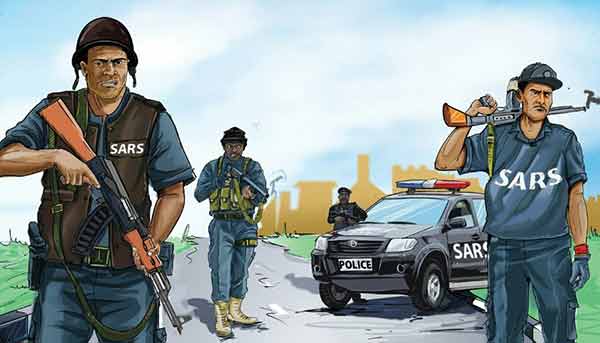 The Nigerian Police Force Public Complaint Rapid Response Unit on 2nd December 2017, opened complain channels for the general public to make complaints about issues concerning the Special Anti- Robbery Squad, popularly known as SARS. The information was made public through a poster tweeted by the Unit’s official handle on Saturday.

A few minutes later, several of Nigerians took to the channel, and also through various social media to air their voices over the particular police unit called SARS, Special Anti- Robbery Squad.

In less than a few hours, millions of Nigerians using the hashtag, #End SARS, have called on the federal government to scrap the police unit as they have caused more menace.

Also, a petition has been addressed to the national assembly, as published by Segun Awosanya had more than 10, 195 signing the petition.

With Twitter agog with complaints about the police unit, notable Nigerians joined in the call for scrapping the unit,

Over 100,000 tweets from concerned Nigerians. The people don’t feel protected. If we cannot FixSARS then #EndSARS.

People are not supposed to be afraid of the people that are supposed to be looking after us. A couple weeks ago, at almost midnight, my friends and I had a gun pointed at us for laughing. For laughing. #EndSARS #ActuallyTakeGunsAwayFromTriggerHappyPeopleWhoHideBehindTheUniform!

On #EndSARS, I call on the IG of Police as a concerned Nigerian to intervene, I know the Nigerian Police as a disciplined force will take action to address this issue. It will go a long way to improving Nigeria’s rating in the global ranking of Police @atiku #AtikuFacebookLive

The arbitrary harassment of young Nigerians by Police (who should be protecting them) has no place in a democratic society.

Somebody sent me DM to learn my voice to the SARS menace. #EndSARS now. Hmmmm. If only they knew I had my own story. My life is more endangered than yours with them. My story …….

A painter and an AC repairer had come to work in my house and I gave them money to go and buy materials. I waited and they weren’t showing any sign of coming so I called, only to be told they had been held by SARS. I took my car and went to the place. #ENDSARS

I got there. These guys have been stripped and their hands tied behind their back. I thought I was known and demanded to see the SUPERIOR OFFICER who was smoking IGBO and drinking with others. Only to be threatened to be shot if I don’t move back. Yeepa. #EndSARS

I went back to the truck to speak with the arrested guys what their offence was and they said, they were on a bike and were stopped by SARS who told them they were riding pass a crime scene so they were suspects. Reallyyyy!!! #ENDSARS

I went back to the SARS guys and they said they weren’t ready to talk to me until they get to their station. I drove behind to the station and the SARS guys disappeared and the case was being handled by another person entirely. #ENDSARS

We got back downstairs. The guy in charge demanded for 20k with a threat. If you like go back to Oga, one day you go just finish performance. We go just shoot you die, put gun sey you thief. How do I go back to the CPA? #ENDSARS

I asked myself what if these guys weren’t working for me that day. That is how their future could have been jeopardized and they will be labelled criminals for crimes they had no idea happened. Beaten and stripped. #ENDSARS.

I have experienced the brutality from some power drunk #SARS police officials as well. Hoping the govt can act swiftly on this one.

Perhaps, the Police did not expect the backlash they had received from the general public, as they have announced that they have no intention of scrapping the unit this is contrary to the claims millions of Nigerians have concerning the wrongdoings against SARS, adding that those who were against the unit are criminals, as the anti-robbery unit has done a lot in sanitizing the country.

According to Vanguard Newspaper, the Force Public Relations Officer, Jimoh Moshood, a Chief Superintendent of Police in an interview, has called out those who wish to scrap SARS, he insists that anybody calling for the scrapping of SARS is an armed robber, let him come forward so that we can investigate him.

We would continue to watch as the drama unfolds.

Featured Image Credit: The Will Nigeria