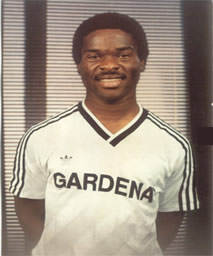 For many football lovers 12 August, 1989 was a day to look forward to. It was a day when Nigeria would commence its qualification bid for the 1990 World Cup at the National Stadium, Surulere.  According to the Confederation for African Football (CAF), attendance was put at an estimated 100,000 people. And our opponents were the Palanca Negras of Angola. The game which kicked-off at 4 O’Clock had been extremely tight with both teams showing superlative competence in midfield and defense.  It wasn’t until the 44th minute that Super Eagles’ skipper, Stephen Keshi found the back of the net via a massive build up from our very own dreadlocked midfield maestro, Samuel Sochukwuma Okwaraji. The Angolan National team stole the show in the second half in desperate search for an equalizer to no avail.  Then, in a flash, ten minutes from the end of the game, Samuel collapsed on the pitch to the utter dismay and shock of the crowd. He was pronounced dead shortly after. An autopsy conducted showed that he had died of an enlarged heart.

This article was first published on 19th September 2012

Nigeria occupies the 8th spot on the medals table. Nigeria’s medal haul in the ongoing 2022 Commonwealth Games in Birmingham, United Kingdom, increased to 13 on Thursday, August 4, 2022, after Team Nigeria added four medals. Three out of the four medals were won in Para Powerlifting while one medal came from Women’s Discus Throw. … END_OF_DOCUMENT_TOKEN_TO_BE_REPLACED

The Spanish-based stars were outstanding in Nigeria’s campaign at the continental showpiece. Read more about Sports Nigerian national women’s football team stars, Rasheedat Ajibade and Osinachi Ohale, have been named in the 2022 Women’s Africa Cup of Nations (WAFCON) Best XI. The duo was instrumental to Nigeria’s campaign at the tournament which saw them qualify … END_OF_DOCUMENT_TOKEN_TO_BE_REPLACED

In the space of one week, four Nigerian women have achieved feats that brought some form of respite to the nation in the midst of a tension-ridden political climate. Read more about Sports Asisat Oshoala set the ball rolling on the 21st of June, 2021 when she won the African Player of the year; her … END_OF_DOCUMENT_TOKEN_TO_BE_REPLACED