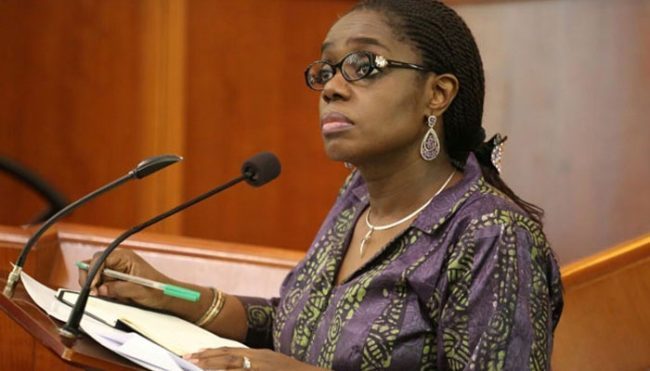 35
SHARES
ShareTweetWhatsappSave
Mail
Kemi Adeosun has reportedly resigned from her responsibilities as Nigeria’s Minister of Finance, sending the President Buhari-led administration in search of her replacement. Many believe her resignation is not unconnected to previous claims the minister had forged her National Youth Service Corps certificate. However, The PUNCH newspaper reports that the minister was in her office this morning, putting a blur to the authenticity of the news about her resignation. Since the allegations of her falsified NYSC Certificate made it to the public, many Nigerians have called for either a thorough investigation by the Federal Government or her resignation for resuming office with a falsified document. Appointed by President Muhammadu Buhari in November 2015, Adeosun became Nigeria’s Minister of Finance after been cleared by the Department of State Services and by the Senate.

This article was first published on 14th September 2018

Also known as 'Glofame', Henry is a prolific Writer, fine lyricist and an audacious independent Spoken Word poet who loves God, appreciates music and enjoys other forms of performance art.

One thought on “Adeosun Resigns As Nigeria’s Minister of Finance”

A Permanent Voters Card is something that every Nigerian desires to have right now. The General Elections in 2023 are less than a year away. Read more about Politics Here’s something you should know: the Continuous Voter Registration activity was launched by the Independent National Electoral Commission (INEC) in June 2021. This registration exercise is … END_OF_DOCUMENT_TOKEN_TO_BE_REPLACED

Following the resignation of Boris Johnson as Prime Minister of the UK on 7 July 2022, 46-year-old Nigerian-born woman, Kemi Badenoch among seven otherrs has been tipped to succeed Boris as Prime Minister. Similarly, other nominees who received at least 20 nominations to become the UK Prime Minister include Suella Braverman, Jeremy Hunt, … END_OF_DOCUMENT_TOKEN_TO_BE_REPLACED

Peter Obi believes Baba-Ahmed is reputable for the position of a vice president if he wins in 2023. Read more about News After weeks of deliberation and consultations, Nigeria’s Labour Party on Friday, July 8, 2022, unveiled Senator Yusuf Datti Baba-Ahmed as the running mate of Peter Obi in the 2023 presidential election. The unveiling … END_OF_DOCUMENT_TOKEN_TO_BE_REPLACED