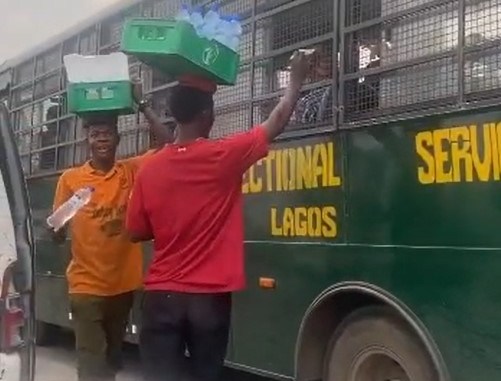 A young man by the name of Ekuma Jeremiah Iziogo was caught on live video giving, at least, 70% of the money he got from selling bottled water to prisoners in a correctional service vehicle stuck in traffic in Ajah, Lagos.

The young man became an internet sensation when he was captured in a live video sharing his proceeds to inmates who hung around the windows of the correctional service vehicle with his crate of bottled water balanced on his head, and this got people talking on social media.

The video, captured by Ojo Emmanuel, a photographer, who wanted to take the hawker’s account number felt he needed to capture this heart-melting moment. He promised to raise not less than N25,000 for Iziogo in a bid to reimburse him for his generosity.

In a bid to reward him for generosity, his account number was gotten and distributed online. As of the writing of this article, the young man has received over a sum of N500,000. His bank account was flagged down by his bank when the donation got up to N300,000 because it was a student’s account.

In an interview, the young man stated that there was no inspiration to what he did to the inmates at the traffic. He was simply sympathetic to the inmates’ plight whom he believed he was better off than. To him, these inmates don’t have the freedom to do whatever they want to be compared to him who is a free man.

He was simply putting himself in their shoes. He told the press that he started with giving N100 to one of the inmates and other inmates began to beg for theirs, thus, he felt compelled to generously dole out his money to them.

Many Instagram, Twitter and Facebook users have expressed their joy over this. To many Nigerians, this was a pure act of kindness and not some paparazzi stunts as some will always pull to gain social media attention.

“Wow I pray he should be uplift & may his destiny helper locate him soon this is the definition of if he has more he would be generous for life & willing to help those below him.”

“Giveaway without no shout it a blessing for him and his generation not some people here they want the world to know they do Giveaway.”

“And he wasn’t doing it for the camera or paparazzi crewthis is genuine kindness. God bless you and multiply you in 1000 folds my gee.”

“A clear example dat u do not have to own d world to show kindness. Some pple feel u must b at a certain level to do des acts therefore they are always begging bxoz dey feel others have it all. I hope his act of kindness teaches you otherwise. God bless him.”

This hawker’s generosity has reaffirmed the belief that generosity is an attitude that comes out of the heart regardless of how much we have and not necessarily when we have so much. With so little, in his lowly estate, this bottled water hawker has astonished the world, yet reminding us that goo that good person.