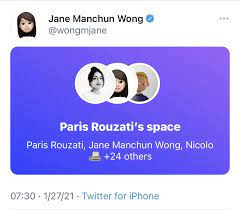 Twitter announced the launch of Twitter Spaces in December 2020. Accounts with 600 or more followers can now host Spaces on Twitter. This latest update affects users of both iOS and Android devices.

This guide will teach you all you need to know about Spaces, including how they work. Spaces is a “place to come together, designed on the voices of the people using Twitter, your Twitter community,” according to Twitter.

To put it another way, Twitter’s audio-based Spaces, similar to Clubhouse, will let users gather with another person or a group of users for live talks. You’ll be able to witness them as they happen. They will no longer be publicly available on Twitter once they have concluded.

Spaces will be kept on Twitter’s servers for 30 days to “examine for violations of the Twitter Rules,” according to the company. For as long as Twitter has a copy of its Space data, hosts can download it. Speakers can also get a copy of the transcript of their remarks.

When someone you follow begins or speaks in a Space on Twitter for iOS or Android, a purple bubble will display at the top of your timeline for as long as the Space is active. You can respond to what you hear with emojis, tweet or DM the Space, or request to speak when you join a Space as a listener.

What Are Twitter Spaces And How Do They Work?

When you create a Space, you have complete control over who speaks, what themes are discussed, and everything else.

How To Create Spaces

There are two ways to begin creating a Space:

You can invite individuals to talk, offer their ideas, and send emojis, among other things.

To begin, your microphone will be turned off. Start your Space when you’re ready.

You can now begin recording in your Space.

It’s worth noting that only the person who started the Space has the power to end it.

How To Become A Member Of A Space

It’s simple! In your Fleets section, locate the Space, select it, and then press the Join this Space icon that appears. To begin, your microphone will be turned off.

You can pin tweets to the Space, switch on captions so everyone can follow along with what you’re saying, and tweet the Space so your followers may join if you join a Space as a speaker.

Anyone with the Twitter iOS or Android app can join a Space right now, but only people with more than 600 followers can host them.

Note that accounts with password-protected tweets are unable to establish Places, but they can join and speak in others’ spaces.