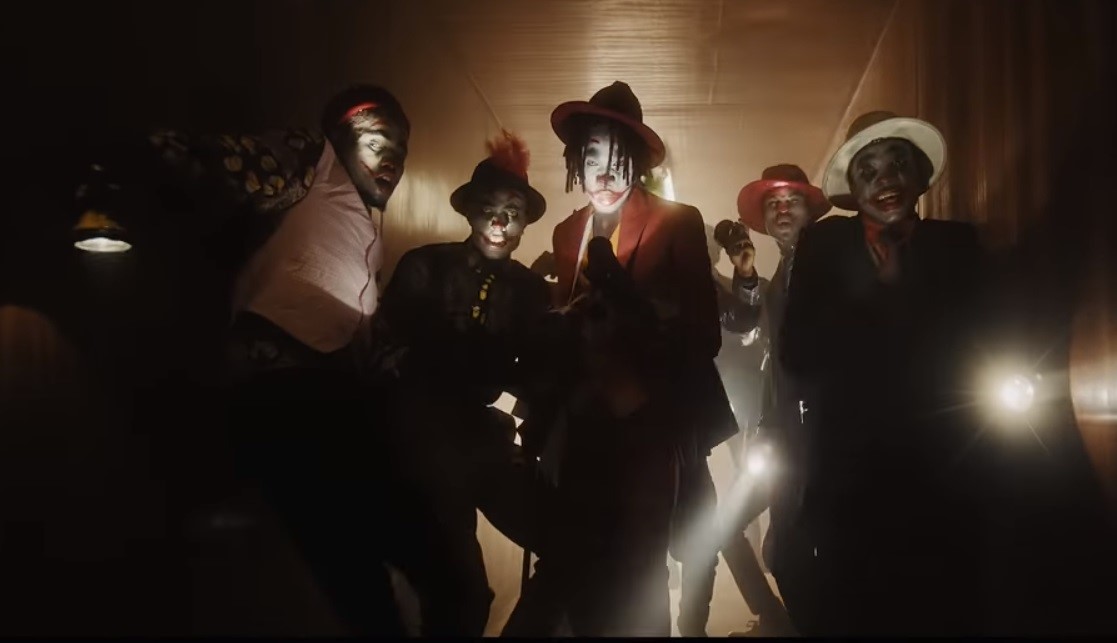 Our song of the week is Scatter, a track on Fireboy DML’s Laughter, Tears and Goosebumps album. Let’s start with the music video. Have you seen it? If you haven’t yet, you need to grab some popcorn and settle down because Clarence Peters went wild with this one. The music video is set in two universes: the first has no name (a slip by the producers?), and the second is ‘Fire City’; a place where Fireboy is the Joker. In the first universe, Fireboy launches what looks like a bomb but turns out to be a party. He appears on screen in the first scene, sets off a timer on his watch, and suddenly everyone is going crazy: dancing those jerky moves that frightened us so much in Michael Jackson’s Thriller music video.

In ‘Fire City’ (the second universe), Fireboy gives an incredible performance as a dread-headed Joker. Prepare yourself for this part, because he and his crew of madmen may just frighten you out of your seat. The makeup, costumes and creepy behaviour are all a part of some terribly disturbing show, with Fireboy as the main attraction. Every single little detail will contribute to giving you goosebumps, from the way Fireboy licks his lips to the words scrawled in scarlet red on his yellow waistcoat: ‘Why so serious?’

The end credits say all scenes were shot in Lagos but the VFX effects will transport you forward in time to a dystopian Nigeria (maybe when the climate crisis finally reaches its peak.) Direction was by Clarence Peters, production was by Adepoju Segun, and the VFX effects were by WG Film (a Swedish production company) and ‘Olimani.ng’. Clearly, a lot of work went into creating this music video; but it’s the combination of video and song that really give the Scatter video all the brilliance that it holds.

Fireboy seems to have a knack for this. He isn’t just a talented singer, he’s a mesmerising performer. Able to channel whatever vibe he’s offering in his songs, through his natural acting and energetic dancing in videos. Jealous only started making serious waves after a music video was released for it, and the King music video (shot by the eccentric T.G Omori) was almost as unusual as Scatter. Perhaps intentionally, Fireboy DML has laid out a catalogue of music videos on his Youtube that are guaranteed to keep your eyes on the screen: and each one flatters the song it was made for.

Olamide signed Fireboy to his label, YBNL, after he watched him sing on a Cool FM Aux Session. Then Fireboy DML coasted into the limelight with his sensual hit, Jealous – a song that he sings with enough emotion to make you shift in your seat. The song was originally released on the YBNL Mafia Family project in 2018 but has run throughout the year as one of the biggest singles of 2019. Fireboy released Jealous again as one of the tracks on Laughter, Tears and Goosebumps. The album features 13 tracks in total, with other songs like Vibration, Gbas Gbos, and Like I Do – songs that are just as likely to become hits in the coming weeks.