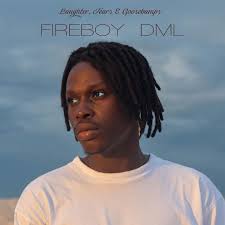 “One man, one city, one night, one street, one journey, one dream.” Our song of the week starts out slow. Fireboy DML introduces us to the solitary nature of his humble beginnings. It’s lonely at first when you’re chasing a dream. On top of that, you have to deal with the burden of carrying your own aspirations. You can probably relate because we all have goals that other people may not understand or believe in. The song transitions smoothly to the hook/chorus, where Fireboy DML croons with ambition, telling us to “wait and see.” The earnest way Fireboy DML sings makes the words sound like they’re more than just lyrics; Wait and See might just be a promise of all the good music and progress that’s yet to come.

Read more about other Songs of the week

Wait and See is the 13th track on Laughter, Tears and Goosebumps (LTG), Fireboy DML’s debut album. Fireboy DML broke out with the hit single “Jealous”, a track that was on the 2018 YBNL Mafia album. Since then, his celebrity and his music have been on the rise. He followed up on the success of “Jealous” with “King” and “What If I Say”, two tracks that by all appearances cemented his status as an artist to watch. And it does seem that people have been watching his progress.

Adekunle Gold gave high praise to Fireboy DML on twitter, calling the LTG album a ‘beautiful debut’, and reactions to the album have been generally positive. The album holds 13 tracks and offers no features. The lack of features is an interesting move for a young artist on his first album since the debut strategy of most young stars in the Nigerian music industry is to collaborate as much as possible with the most relevant acts of their time. Without features, Love, Tears and Goosebumps is Fireboy DML’s budding talent on display. The 23-year-old singer offers a medley of sounds and emotions in LTG; from the soulful Afro-fusion of Gbas Gbos, to the bold and energetic street sounds of Omo Ologo.

Olamide, a tastemaker and recording artiste who persistently carved out a niche for himself in the Nigerian music industry, has led a number of alternative Nigerian artistes into the limelight. Lil Kesh and Adekunle Gold are two artists that have found mainstream success and appreciation after breaking out through YBNL and Olamide’s management. It’s easy to hope and assume that Fireboy DML’s career will follow the success of those that have gone before him.

Listen to Wait and See below and let us know what you think:

Continue Reading
Advertisement
You may also like...
Related Topics:entertainment, featured, Fireboy DML, Music, song of the week, Wait and See